E-scooters continue to grow in popularity as a cheap alternative to public transport and a way to reduce car usage.

However, road safety groups have highlighted the dangers they pose on public footpaths and pedestrian areas.

Legislation to regulate the safe use of e-scooters is to be introduced with international rental companies competing to set up shared schemes.

They are cost effective, eco-friendly and here to stay.

Service operators are vying to get into cities like Galway, and today in Eamonn Deacy Park these e-scooters were showcasing tech solutions to prevent riding on footpaths and other unsafe behaviour.

"Ireland is one of the last companies in Europe to legislate for e-scooters and we have learned a lot from other jurisdictions about operating shared schemes safely in Ireland," said Jean Andrews, Policy Director of the Superpedestrian service operator.

"There were challenges in the early days but now we have geofencing technology to prevent what's called pavement clutter and we have sensors to detect riding on the footpath which will power down the scooter," she said.

Under new legislation e-scooters will be categorised as powered personal transporters allowing them to be used in public places without a driving license, tax or insurance.

Fine Gael TD Ciaran Cannon is an avid long distance cyclist who was seriously injured in a road collision during the summer.

Mr Cannon is passionate about road safety and said the new technology will help ensure that e-scooters are safely integrated into towns and cities around the country.

He particularly welcomes them in Galway, which has one of the most congested cities in the country.

"Having a regulatory environment in place and a share e-scooter system similar to the ones being used in many other cities around the world is really important and I look forward to the new legislation being in place shortly," Mr Cannon said.

However, the Mayor of Galway, Colette Connolly, is opposed to e-scooters in cycle lanes.

"It's not something I would be in favour of as a pedestrian and as a cyclist myself," she said.

"I think they would pose a danger because the two vehicles don't go at the same speed so that would be my concern. With legislation imminent, I just wonder if the Government is intent on using the road space and sharing that space with a car and an e-scooter and how that might work out.

"Or are they planning on the use of bus corridors and cycle lanes. I don’t think the cycle lanes - of which there are few in Galway - would be suitable. Most of the cycle routes here in the city aren’t suitable for e-scooters," she added.

Pedestrian safety still dominates the debate on e-scooters especially for vulnerable older people like Sally and Pat Carty, who encounter them daily when out for a stroll.

Pat is not opposed to them, however, he said he would like to know if they have insurance cover. 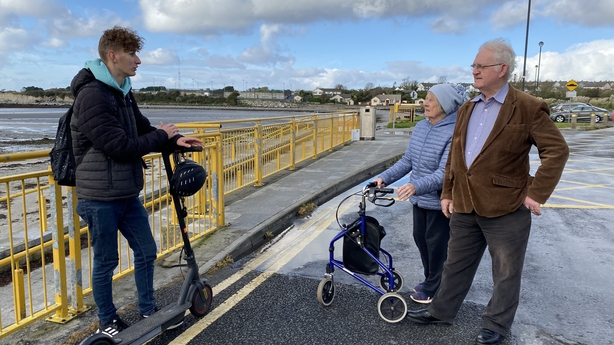 A number of safety measures being proposed in the new bill include:

· Compulsory helmets for those aged between 16 and 18;

· A ban of use on footpaths.

"They're very safe. I’ve three different settings - 10km per hour, 15 km per hour and then the fastest I can go is 25 km per hour.

"I usually go on the footpath because the roads aren’t too safe at the moment. I’ve lights and my helmet and I’m very careful. There’s legislation coming though and that’s most important," he said.

"When I’m on the road or footpath people are always scared, they jump to the side and I understand why because they see a fast vehicle approaching them on two wheels and it doesn't look stable so having the legislation outlining what I’m allowed to do will help everybody," he said.