French business magnate, actor and former politician Bernard Tapie, whose swagger and made-for-headlines career made him one of the country's best-known celebrities, has died at the age of 78.

He was diagnosed with stomach cancer four years ago.

"Dominique Tapie and his family have the immense sadness to announce the death of her husband and their father, Bernard Tapie, this Sunday," they said in a statement to La Provence newspaper in Marseille, in which Tapie was a majority stakeholder.

"He left peacefully, surrounded by his wife, his children and grandchildren, who were at his bedside," the statement said, adding that he wished to be buried in Marseille, "the city of his heart."

His death prompted an outpouring of condolences from politicians across the political spectrum, with French President Emmanuel Macron hailing an "ambition, energy and enthusiasm that were a source of inspiration for generations of French people."

"This man, who had a combativeness that could move mountains and take down the moon, never gave up," his office said in a statement.

Born in a rough corner of Paris on 26 January 1943, Tapie rose from modest beginnings to become one of France's most successful and high-profile businessmen, buying up and reviving dozens of failing companies and revelling in his wealth with American-style flair.

A huge sports fan, he was the longtime chairman of the Olympique de Marseille football club and bought a cycling team that twice won the Tour de France, anchored by the French legend Bernard Hinault.

He guided Marseille to five successive league triumphs and the 1993 Champions League title.

However charges of match-fixing tainted the team's Champions League victory - the only time a French club has won the trophy. 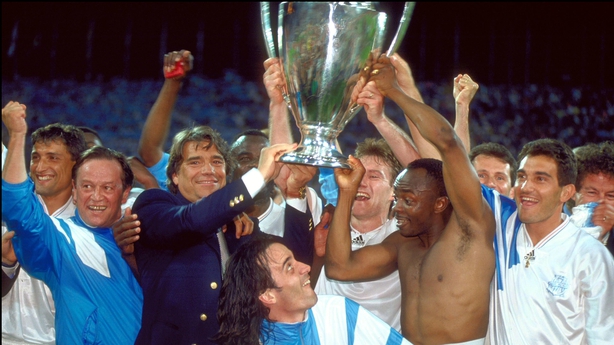 "I spoke with him by phone early this year, he said, 'I'm hanging on. You have to fight, you have to believe'," Hinault told AFP .

"There are people who win and people who lose. He was among the former," he said.

Tapie also found time to act, building on the nightclub singing performances of his youth, taking roles that included a police inspector on a popular TV show.

He also dabbled in politics, becoming urban affairs minister in the Socialist government of Francois Mitterrand in the 1990s - though only for two months.

Later he was elected as a leftist French and European Parliament MP based in Marseille, a city longtime considered a bastion of the right.

Tapie's empire collapsed spectacularly in the late 1990s, beginning with the match-fixing trial that saw him serve time in jail.

He was also found guilty in a series of cases for corruption, tax fraud and misuse of corporate assets.

His most controversial prosecution came over his purchase of the German sports brand Adidas in 1990, which he was forced to sell just a few years later to the state-owned bank Credit Lyonnais.

Initially victorious in his claim that he was cheated over the sale price, Tapie was awarded €404 million by an arbitration panel in 2008.

However the payout sparked claims that the ruling was rigged in Tapie's favour, in particular because it was approved by finance minister Christine Lagarde under then-president Nicolas Sarkozy, a longtime Tapie ally.

A court later found him guilty of fraud and ordered him to repay the money, a decision Tapie appealed - a court is due to issue its ruling on Wednesday.

Ms Lagarde, now president of the European Central Bank, was found guilty of negligence in 2016, though she received neither a fine or jail time.

Yet Tapie remained immensely popular, his opinions regularly sought by journalists on the issues of the day.

Earlier this year he published a book - "Bernard Tapie: Lessons of Life, Death and Love" - in which he called the Adidas sale "the biggest" of all the "stupid mistakes" in his career.