Cryptocurrencies that seemed to be defying gravity just weeks ago came back down to earth with a bump today, after a roller-coaster ride which could undermine their potential as mainstream investments.

While many analysts thought the explosion in crypto interest this year was not sustainable, the trigger for the shake-out was China's move on Tuesday to ban financial and payment institutions from providing cryptocurrency services.

At one point on Wednesday nearly $1 trillion was wiped off the market capitalization of the entire crypto sector.

In early afternoon trading, their market cap was $1.8 trillion, according to data tracker CoinGecko.com.

"There's a lot of leverage embedded into crypto stocks so there will be a spillover effect into equity markets in the short term and there is also quite the inflation fear as the market thinks the Fed might have to hike rates abruptly if prices keep rising," said Thomas Hayes, chairman and managing member at hedge fund Great Hill Capital LLC.

Federal Reserve officials played down any risk to the wider financial system.

"By itself I don't see that as a systemic concern at this point," St. Louis Federal Reserve president James Bullard said. "We are all quite aware that crypto can be very volatile."

Nevertheless, a move into safe-haven US Treasury securities knocked yields lower, while stocks were also on the defensive. 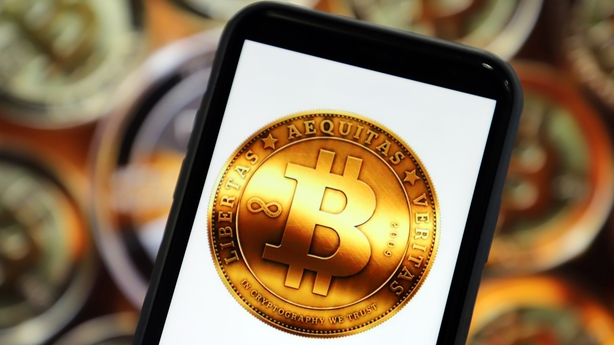 Bitcoin, the biggest and best-known cryptocurrency, had already been under pressure from a series of tweets from Tesla's Musk, but the news from China sent it further down.

It is also heading for its first monthly decline since November 2018.

"Any asset which has risen as much as bitcoin over the past year can be expected to have pullbacks as some investors withdraw profits, like we're currently seeing. While often a brilliant investment opportunity, traders must remember that Bitcoin is still an emerging asset class and will continue to experience large price swings," he added.

Bitcoin's decline whacked other crypto assets, with Ether, the coin linked to the ethereum blockchain network, dropping to $1,790, its weakest level since late January.

Since hitting a record high on May 12, ether has plummeted 57%.

Meme-based dogecoin also tumbled -- losing nearly 26% to US$0.35, according to Coingecko. Shares in the crypto exchange Coinbase dropped 6.7% on Wednesday.

Coinbase's share price has nearly halved from the peak hit on the day of its direct listing in April.

Cryptocurrency price declines last week were sparked by Musk's reversal on Tesla accepting bitcoin as payment, citing the heavy environmental toll of "mining" bitcoin, which requires a lot of electricity to power the computers that create bitcoin.

In the midst of the crypto sell-off on Wednesday, Musk tweeted a 'diamond hands' emoji though, used in social media to signal a position is worth holding on to.

Technical factors were also said to be at play as bitcoin appeared to accelerate once it fell below its 200-day moving average, a chart position which traders follow.

Some crypto-watchers predicted more losses ahead, noting the fall below $40,000 represented a breach of a key technical barrier that could trigger more selling.

ARK CEO Cathie Wood on the other hand, said in an interview with Bloomberg on Wednesday that she is still sticking to her $500,000 forecast for bitcoin.