Intel has confirmed there has been an outbreak of Covid-19 on the construction site for its new manufacturing facility in Leixlip, Kildare.

Responding to a query from RTÉ, a spokesperson estimated the number of cases at "approximately 70" but described the situation as "fluid".

She indicated that the main contractor was actively working with the relevant public health authorities, and that follow-up testing has resulted in further positive cases being identified.

Workers at the site have been informed.

"We are working to support our construction team in whatever way we can - to understand what has happened in this situation and how it can be addressed with corrective measures," the spokesperson said.

"For all confirmed cases, contact tracing was conducted and any other workers who may have been exposed have been required to self-quarantine and monitor their health. Additional testing of workers at the construction site is being carried out and any affected areas are subject to deep cleaning and disinfection."

Intel said that for confidentiality reasons they were not disclosing details of any specific cases.

The Intel spokesperson said that the construction site remains "operational", saying: "We are strictly adhering to the advice of the public health authorities."

The Health and Safety Authority which oversees workplace safety said it was aware of the outbreak.

It said it was supporting, as required, the public health authorities who were responsible for the investigation and management of Covid-19 outbreaks.

The HSE said it cannot comment on individual cases or outbreaks.

It said a risk assessment and "appropriate investigations" would be undertaken of the situation and control measures put in place.

The Construction Industry Federation said it does not expect the Covid-19 outbreak at the Intel site to affect the planned reopening of all construction by 4 May.

CIF Director General Tom Parlon described the detection of at least 70 cases on the site as a "blip", and one that they had to be careful about.

However, he noted that in the last week to midnight on 19 April, only 33 cases had been identified in the construction sector - down from 42 in the previous week.

He estimated the total figure for cases on construction sites since the beginning of January at around 145.

Mr Parlon said he still expected the government to announce that all construction sites would reopen next week.

He noted that the Intel site is the biggest in the country, with a workforce of 5,000 based in one location.

He said the site was well-managed, and that the construction sector had one of the most robust Standard Operating Procedures.

He said that PCR testing had been carried out up to now, and that antigen testing was due to begin next week.

PBP calls for Intel construction site to be closed down

People Before Profit Employment Spokesperson Paul Murphy described the situation at the Intel site as a "mass outbreak" and called for the site to be closed down.

He said he had been contacted earlier today by a worker alleging that there had been over 150 cases.

Mr Murphy claimed multiple workers had contacted him over the last year raising concerns about Covid conditions at the site.

"This major outbreak in Leixlip is the consequence of turning a blind eye to what was happening at Intel because of allowing it to open on the grounds of it being foreign direct investment," he stated.

"Work should be immediately stopped while full testing is carried out."

Mr Murphy also accused the Taoiseach Micheál Martin of failing to respond to a letter he had written to him in January about the matter.

Meanwhile, the Social Democrats co-leader, and Kildare North TD, Catherine Murphy said that she had been assured that the company was "working with public health teams to identify and isolate any positive cases".

She said: "A review of travel plans should be undertaken to ensure that transmission is not occurring when workers are congregating in cars or buses on their way to, or from, work.

"It is hugely important that serial testing, antigen testing and rapid test-and-trace are all utilised to the greatest extent possible to break chains of transmission, ensure a safe work environment and prevent spread to the wider community." 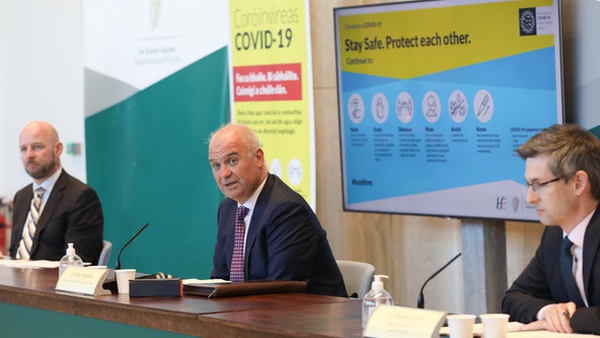