Ryanair is reasonably confident that tourists will be taking holidays across Europe in June, July and August, a ray of hope for the tourism industry amid gloom over a rise in Covid-19 cases in top destinations.

Michael O'Leary, grpup chief executive of Europe's biggest airline group, said his growing optimism was based on the speed of the British vaccine rollout.

Following a surge in bookings from the UK and Germany, he said Ryanair planned to operate at 80% of a normal summer schedule in July, August and September.

"I think it is very difficult to persuade the UK population to sit at home, or holiday at home when everybody's been vaccinated," he told reporters.

Airlines and travel companies across Europe have started to brace for a second lost summer after politicians and scientists urged consumers not to book flights for fear of bringing new variants back into the country that could undermine the vaccine programme.

Britain currently bans all foreign travel, except for work, education or health reasons. However, the government is to review that in April and possibly allow it from May 17.

Michael O'Leary had earlier said he was "reasonably confident that there will be unrestricted holiday travel for British families going to European beach resorts".

Ryanair also said it was adding 26 new routes to destinations in Greece, Portugal and Spain from the UK.

"We should be reasonably confident and optimistic," he told Sky News.

"I think there's a reasonable prospect, higher than 50%, of the UK families will be holidaying in June, July and August, in theory, in Spain, Greece and Portugal as normal," he added.

Ryanair also said it is planning 2,500 flights a week to, from, and across Spain this summer as it bets on a surge in demand for holidays even as infections rise across much of Europe. 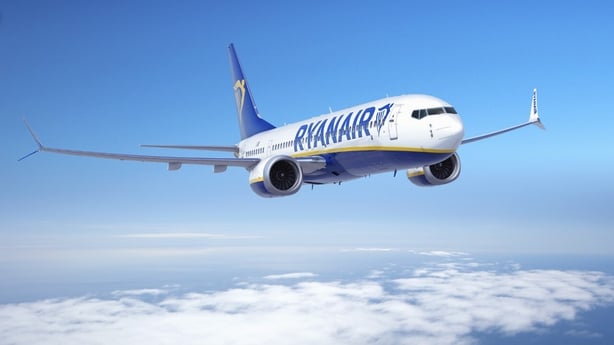 Marketing director Dara Brady told a news conference today that the airline planned to operate 582 routes in, out of, and across Spain, including 48 new ones, in a sign of the expected surge in demand for trips.

Spain was the world's second-most visited country before the Covid-19 pandemic.

"We're seeing an increase in capacity versus what we would've seen last year (without the pandemic). Our domestic Spanish schedule is around 20% bigger than in previous years, and certainly bigger than last year," he said.

Although Ryanair has cut its overall passenger numbers forecast for this fiscal year to 26-30 million, it expects a pick up in the pace of Europe's vaccination campaign to allow for a "decent" summer.

Dara Brady also said Ryanair would not appeal against a European Court of Justice decision that backed Spanish state aid worth €53m to small airline Plus Ultra, and would instead focus on its appeal against Spain's larger aid package for Air Europa, which it considers discriminatory.

Asked about Germany's recent request that airlines arrange Covid-19 tests for German tourists returning from Spain's Balearic Islands, Brady said Ryanair would comply with all government regulations but that it should not be airlines' responsibility to organise tests.

Spain today said it would allow some travellers from Britain from March 30, although Britain's own ban on non-essential international travel makes any immediate revival of tourism unlikely.

Meanwhile, Ryanair also said today it expected to take delivery of 16 Boeing 737 MAX aircraft before the coming summer season, lower than the previous guidance of up to 24 it had given in February.

Michael O'Leary told an online news conference that Ryanair expected to receive eight of the MAX aircraft in April, another eight in May and none in June.

He said the airline was planning to fly 80% of its normal schedule in July, August and September and had the ability to revise it upwards or downwards if needed.