The amount of broadband data used by households and businesses increased in the final quarter of last year, compared to the same period in 2019, according to a new report by the Commission for Communications Regulation (ComReg).

On average, households on fixed broadband plans used 350.7GB per month, an increase of 65%.

Meanwhile, the amount of data being used by businesses increased by just over 14% to 151.2GB per month.

The report shows that almost 82% of broadband subscribers purchased broadband with speeds equal to or greater than 30Mbps during this period.

While 42% purchased broadband speeds equal to or greater than 100Mbps.

The number of fixed broadband subscriptions rose to 1.51 million during the fourth quarter, an increase of 3.7% compared to the same period in 2019.

Of these, almost 250,000 were fibre-to the-premises subscriptions, representing 16.4% of total fixed broadband subscriptions, up from 11.1% in quarter four of 2019. 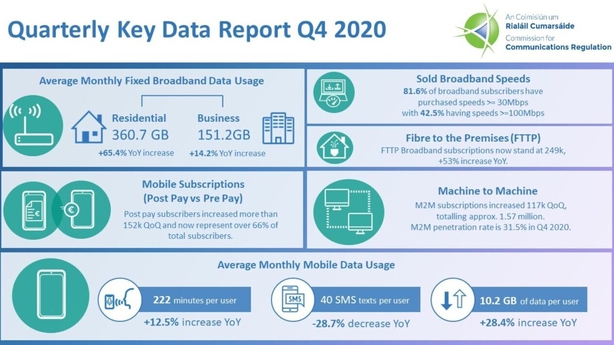 The report shows that average monthly mobile data usage was up over 28% compared to the same period in 2019, to 10.2GB.

The number of calls being made increased by 12.5% to 222 minutes on average per user, while the number of SMS text messages decreased by over 28% to 40 texts per user.