Aer Lingus and British Airways owner IAG has posted a loss after tax and exceptional items of €6.923 billion for 2020 after a year of minimal flying in the pandemic when it has burnt through cash.

The company warned it could not give guidance due to the ongoing travel slump.

Today's IAG figures show that Aer Lingus recorded an operating loss of €563m last year as a result of the dramatic effects that Covid-19 travel restrictions had on its business.

The worsening travel outlook and tighter restrictions brought in by countries over the last two months have threatened to ruin Europe's critical summer season and leave some carriers in need of another round of funding support, analysts warn.

IAG said that the ongoing uncertainty and duration of Covid-19 meant that it could not provide a future profit forecast.

This illustrates the scale of the challenge for IAG's new boss Luis Gallego, who is six months into the job.

The group's focus continues to be on cutting costs to reduce cash burn to try to ride out the crisis.

IAG said today it had total liquidity of €10.3 billion, and there were now signs there could be some relief on the way for its strained finances.

UK-focused airlines were buoyed earlier this week when Britain laid out plans for travel markets to possibly reopen from mid-May, prompting a flood of bookings, but uncertainty remains over whether it will include IAG's long-haul routes.

"Getting people travelling again will require a clear roadmap for unwinding current restrictions when the time is right," IAG's Gallego said in a statement today.

"We're calling for international common testing standards and the introduction of digital health passes to reopen our skies safely," he added. 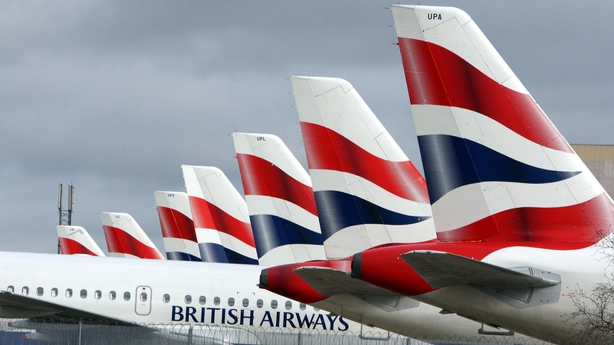 IAG's operating loss before exceptional items, its preferred measure, came in at €4.37 billion, slightly better than analysts' consensus forecast for a €4.45 billion loss.

Shares in IAG have jumped 13% in the last five days, after Britain's announcement on a travel restart, but over the last 12 months have lost half their value.

For the three months from January to March, IAG said it expected to fly about 20% of 2019's capacity, down from the previous quarter's 27%.

The group, which also owns Iberia and Vueling, has been trying to boost its finances as the crisis drags on. Most recently, BA secured an extra £2.45 billion through a UK government-backed loan and from deferring pension contributions.

Last October, IAG secured shareholder backing for a €2.74 billion capital hike, adding to savings made from over 13,000 planned job cuts.

Despite the hefty losses, IAG has stuck to its plan to buy Spain's Air Europa, announcing in January the price tag had halved to €500m, with payment deferred for six years.

IAG's annual loss compared with Air France-KLM's annual net loss of €7.1 billion. That company has so far received €10.4 billion in loans and guarantees from France and the Netherlands and is negotiating a state-backed recapitalisation.