A new report from Oxfam claims the fortunes of Ireland's billionaires has risen €3.3bn since the start of the Covid-19 pandemic.

The Inequality Virus report also finds that the wealth of the planet's ten richest men has grown by half a trillion dollars since Covid-19 began sweeping the globe.

The research concludes that although the 1,000 richest people in the world suffered losses due to the economic upheaval, they had recouped those losses within nine months.

But despite this, Oxfam predicts it may take more than ten years before the world's poorest are able to recover from the economic impacts.

Jim Clarken, Chief Executive of Oxfam Ireland, said a rich elite are riding out the pandemic in safety, while those on the frontline are struggling to pay the bills and put food on the table, often without benefits such as paid sick leave.

"In Ireland, the fallout of the pandemic on employment has disproportionately hit young adults as well as people in low-paid occupations, all of whom are more likely to be paying rent," he said.

"Without significant government intervention, we are looking at a return to long-term unemployment, increasing risks of homelessness and economic insecurity for younger generations in Ireland."

In addition, the pandemic is having a disproportionate economic effect on women.

"Let's remember that 70% of care work, essential work and low paid work in the Irish economy, and similarly across the world, is carried out by women who are in more precarious work, and who don't have the benefits that one would expect from higher paid jobs. It is having a specific impact on women across the globe." 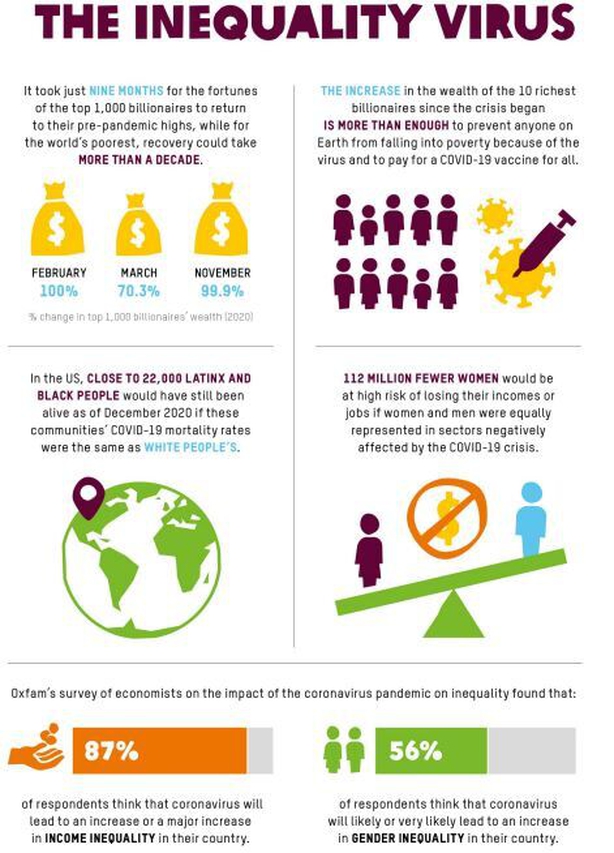 The pandemic has the potential to increase economic inequality in nearly every country at once, the aid agency states.

It says its claim is supported by the findings of a survey of 295 economists from 79 countries, which found 87% predict either an increase or major increase in income inequality in their country.

Of the Irish economists who responded to the survey, 85% said they thought inequality would increase in the country due to Covid-19.

Most think it will be the worst increase in inequality since the financial crash of 2008.

"We stand to witness the greatest rise in inequality since records began, with the deep divide between the rich and poor proving as deadly as the virus itself," said Mr Clarken.

"Around the world the impact of Covid-19 is magnifying and exacerbating existing inequalities as well as racial and gender divides."

"One of the most extreme and unjust indicators of inequality we are seeing around the world right now is between those who have access to life saving vaccine and those who don't'."

Oxfam said it supports the call for a global 'People's Vaccine' to ensure Covid-19 vaccines are given free of charge to the public, fairly distributed and based on need.

"We now know that many countries are hoarding vaccines, and the amount of vaccine that has been created so far has been largely managed or held by the richest part of the world," he said, "so we have been calling for a people's vaccine whereby the intellectual property and the ability to generate the vaccines, which are an amazing development, should be shared and pooled so that generic companies in developing countries should also be able to access that technology so that we can give vaccines to everybody this year."

Mr Clarken added that governments must seize the opportunity to build more equal, more inclusive economies that end poverty and protect the planet.

The report was published on the first day of the World Economic Forum's Davos Agenda event - a week long virtual conference taking place instead of the organisation's traditional annual meeting in the Swiss ski resort.

It is to take place in Singapore later in the year instead.