The Mandate trade union, which represents around 1,000 former Debenhams workers, has urged the Taoiseach to make €3 million available to the workers in direct cash payments, rather than non-cash training and upskilling supports.

Earlier today the workers, who lost their jobs when Debenhams Irish operation went into liquidation last April, rejected settlement proposals drawn up by Labour Court Chairman Kevin Foley, which centred on a €3 million training and upskilling fund to be made available to affected employees.

Gerry Light, Mandate General Secretary said the union believed Mr. Foley's settlement proposals had been emphatically rejected because they did not deliver cash benefits to workers, and because the government had displayed no urgency about implementing legislation to prevent a similar situation arising in the future.

Mr. Light expressed the view that when the government made the principled decision to release €3 million for the training fund for the workers, it should also have been made available on the basis of a cash payment.

He said that if that decision was reversed to permit cash payments, it was likely that the dispute could come to an end.

The state has already paid out €13 million to fund statutory redundancy and payments and other employment rights entitlements, but the union had sought up to €10 million more to deliver the four weeks per year of service enhanced entitlements provided for under a 2016 collective agreement.

Even if the €3 million training fund were converted into cash, it would fall short of what the union had originally sought.

Mr Light said that what the workers were seeking was fair and reasonable, and was achievable, if the political will to it was there.

The Tánaiste and Minister for Enterprise, Trade and Employment Leo Varadkar said that all avenues for resolving the Debenhams dispute have been explored and exhausted - and that the Government will now await the outcome of proceedings in the High Court.

The Department said the Tánaiste noted that the workers had voted to reject the proposal for a training fund, adding that he understands that the ex-Debenhams workers are disappointed that their expectations cannot be met.

It noted that the state has honoured its guarantee of their statutory employment rights, including statutory redundancy.

The statement concludes: "At this stage, it appears that all avenues have been exploited and exhausted and the Government awaits the outcome of the High Court process." 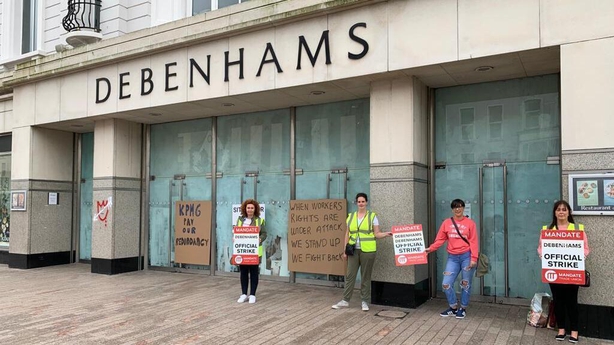 Since the liquidation, workers have maintained pickets on the 11 Debenhams Ireland stores preventing liquidators KPMG from removing stock.

They argue that the proceeds of the stock should be ringfenced to fund the enhanced redundancy terms.

Ahead of the Mandate ballot of former employees, shop stewards had already recommended rejection of Mr Foley's proposals on the basis that they failed to deliver any cash payments for staff, many of whom were already entitled to training from the state.

Last September, they had also dismissed as inadequate an offer from liquidators of an ex-gratia fund of €1m, plus a third of the net proceeds of the sale of the stock.

Those proposals were not put to a ballot of the wider workforce.

In a statement, Mandate confirmed that 430 of around 1,000 former workers voted, with 393 rejecting the proposals - a margin of 91% of votes cast.

The proposal document stated that the Government would establish a €3m training, upskilling and business start-up fund, but crucially, prevented the workers from accessing cash from the fund.

"The elected shop stewards from Debenhams will now meet to determine the next steps in their campaign for a fair redundancy package and changes to legislation to ensure workers are not treated like this in the future," the union said.

Mr Foley's package of proposals centred on a €3m training fund administered by Solas to support career guidance, training, education and business start-ups which would remain in existence for two years or until fully disbursed.

In his report, Mr Foley found that the current legal framework limited the liquidator's ability to contribute to resolving the dispute, and that the 2016 collective agreement for enhanced redundancy terms relied on by the union no longer had legal application. 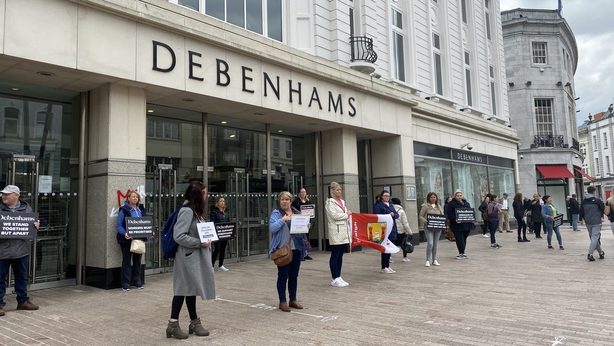 Mr Foley confirmed that Debenhams Ireland went under with debts totalling €18m, with the state bearing the €13m cost of statutory redundancy payments for workers.

He noted that the main preferential creditors of the Debenhams Ireland liquidation are the Department of Social Protection and the Revenue Commissioners, with a debt owed of about €18m.

However, he cautioned: "Available resources are far outweighed by the debt owed to these preferential creditors."

The Labour Court Chairman also noted that the state had taken responsibility for statutory redundancy payments totalling over €13m, with the employer making no contribution to those entitlements.

He pointed out that the extension of the liquidation has depleted almost all cash assets, which at one stage had stood at around €4m.

Mr Foley's report acknowledged that the Department of Enterprise Trade and Employment is currently examining employment and company law provisions relating to redundancy situations, but warned that these changes will not be retrospective.

Given that Mr Foley concluded that his proposals represented "the maximum achievable in a very difficult situation", it is unclear what will happen next.

The liquidators of Debenhams - KPMG - declined to comment on the workers' rejection of settlement proposals.

Meanwhile, Debenhams in the UK is continuing to engage with a number of third parties regarding the sale of all or parts of the business, administrator FRP Advisory said today.

The administrator said that while this process continued, it is planning for the ongoing wind-down of the business as announced on December 1.

It said renewed UK Covid-19 lockdowns meant a number of stores, including Debenhams' flagship store on Oxford Street in London, where it has been unable to agree lease extensions will be permanently closed.

In total, 320 jobs will be impacted by these closures, FRP said.