Robots that helped people survive and stay safe over the past year are touting their value at the tech industry's annual extravaganza amid a pandemic which has given fresh momentum to the robotics sector.

The Consumer Electronics Show, which is being held online this year due to the global crisis, includes robots that have become "heroes" for many during the coronavirus pandemic.

Among those taking the virtual stage at CES are robot companions, concierges, cooks, delivery drones, medical assistants and those handling the perilous tasks of sanitizing workplaces and medical facilities.

Amid a strict virus lockdown in France, the companion robot Cutii became a star in senior facilities.

"We had envisioned Cutii at people's homes. But today we are dealing with isolation on a collective level," he said.

The startup based in the northern French city Roubaix delivered 30 robots for free to senior facilities during the lockdowns and used the experience to improve the technology and train its teams.

"Everything worked well. Every two weeks we would deliver software updates, which had to be done remotely. It's like what Tesla does."

Cutii, which combines elements of a telepresence robot with a smart digital assistant, will be part of the show this year following its commercial launch in France and a marketing push in the US.

Cutii's head of US operations, Richard Marshall, said the crisis has shown people need more than a smart assistant such as Google or Amazon Alexa.

The French-made robot was designed to allow family members to check in, and also help people find activities such as yoga or tai chi classes, either in person or online.

"The point of Cutii is to connect individuals to other people," Marshall said. It is not an Alexa on wheels." 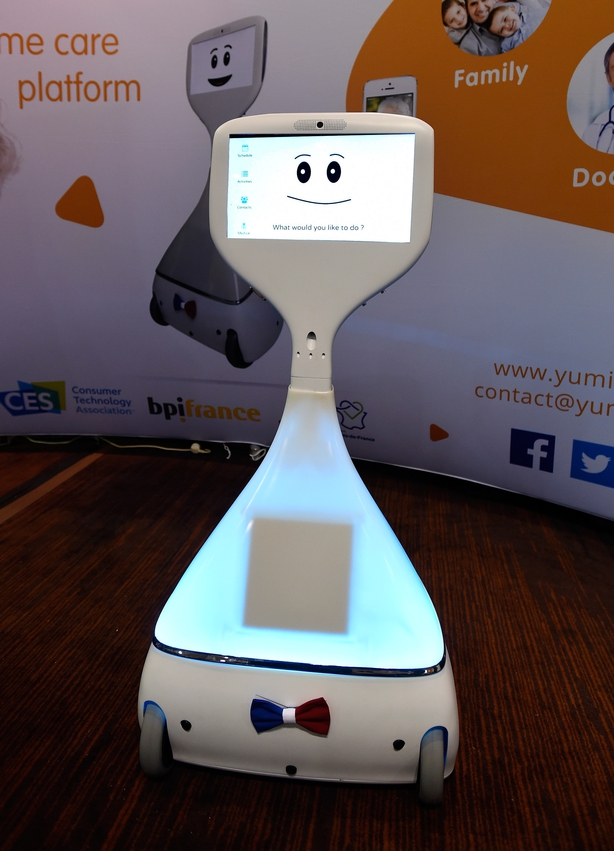 Wendy Moyle, a professor at Australia's Griffith University who specialises in research on the elderly, said studies have shown people may develop "a strong relationship" to companion robots "much like older people do with having a pet dog for company."

But Moyle said current technology for most robots "is just not sophisticated enough" and that many people are disappointed after a while.

Robots have taken on a new role in the workplace and in medical facilities in the era of social distancing.

Misty Robotics, which produces a robot platform open to outside developers, last year launched its own temperature screening app for workplaces and medical facilities, while also working with partners which can make the robot a companion or digital assistant.

The pandemic has made it easier for people to view robots as non-threatening and as friends, said Misty Robotics chief executive Tim Enwall

In an office environment, robots like Misty can become a virtual "concierge" which eliminates the need for risky person-to-person contact, Enwall added.

"The robot at the front door can do that same basic triage in a way that's very familiar to a lot of people," he said.

"It's friendly, it's interactive it's enjoyable," he added.

Meanwhile several exhibitors including South Korean giant LG will be showing a new line of disinfecting robots which have been in demand during the pandemic.

LG's autonomous robot which uses ultraviolet light to disinfect high-touch, high-traffic areas is being launched this year to US hotels, schools, corporate offices, retail and restaurant operators and transportation hubs such as airports and train stations.

The companies are betting that demand for improved health and safety will continue even after the pandemic is contained.

Automated kitchen technology has been gaining interest in recent years, and that has been accelerated by the pandemic, said Alex Barseghian, CEO of startup RoboEatz which began in Latvia and is now headquartered in Canada.

RoboEatz is launching its artificial intelligence-powered autonomous robotic kitchen system that prepares, cooks and serves an array of hot and cold food dishes from soups to salads to meal bowls.

The robotic system, designed for food services operations in corporate offices, campuses and hospitals as well as quick-serve restaurants, takes over some of the tedious food prep tasks while improving food safety and eliminating infection risks from crowded kitchens.

Barseghian said the idea of robotic food prep, which can cut food waste and labor costs, has gained traction as a result of the pandemic.

"For a lot of restaurants, efficiency is important," he said. "Every millimetre in the kitchen is measured. They didn't think about social distancing, so automating the kitchen really solves that problem."

RoboEatz plans to launch its own restaurant in Latvia this month as it markets its "turnkey" kitchen in North America.

Even after the pandemic fades, Barseghian said he expects a continued focus on health and safety in kitchens: "I don't think it will ever be the same again."