New figures from the Central Statistics Office show how the outbreak of Covid-19 and the restrictions it caused has changed the way households use the internet as people's lives became a lot more virtual.

The CSO's latest Information and Communications Technology (ICT) Household Survey reveals that with all but essential retail closed during the lockdown period from March until the end of June, 63% of internet users bought clothes, shoes or accessories online.

17% of consumers also bought food or drink from shops or meal-kit providers online.

Remote working and home schooling also had a big effect on the internet usage of individuals and the CSO noted an increase in the use of video calls on services including Skype, Zoom, WhatsApp, FaceTime, Snapchat, Facebook Messenger and Viber.

It said that 73% of internet users carried out this internet activity in 2020, compared with 48% the same time last year.

Use of educational websites or portals for communication between teachers and students also increased by seven percentage points in 2020 - rising to 21% from 14% in 2019. 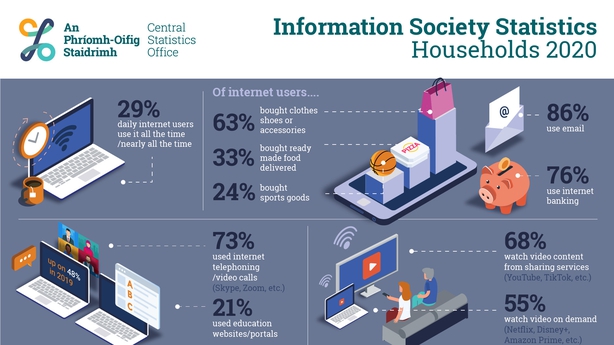 Today's survey also showed that email was the most popular activity carried out on the internet in the period under review, with 86% of internet users using email, an increase of two percentage points on 2019.

The survey was carried out during the first and second quarters of 2020 and data was collected during the pre-pandemic period and during the initial set of Covid-19 restrictions.