Chinese consumers snapped up everything from food to electronics and beauty products today as retailers slashed prices for the world's largest online shopping bonanza, closely watched this year for clues on post-pandemic consumer sentiment.

The marathon spending spree has for more than a decade seen China's army of shoppers shell out colossal amounts of cash that has dwarfed the incomes of many small nations.
And this year will be no exception.

While "Single's Day" - so-called for its annual 11.11 date - has long-been a 24-hour event, e-commerce giant Alibaba has expanded it to an 11-day promotion beginning November 1.

As of last night, Alibaba platforms had already processed 372.3 billion yuan ($56.5 billion) in sales over that period, more than the GDP of Iceland, Lebanon and Georgia combined.

Leading China retailers such as Alibaba, JD.com, and Pinduoduo compete aggressively for Single's Day, which far outstrips the pre-Christmas "Black Friday" promotion in the US.

But Chinese regulators cast a gloom over the biggest e-commerce stretch of the year by announcing draft competition rules that signal a looming crackdown on high-flying internet giants.

The rules published this week outlined plans to prevent "monopolistic behaviour" among internet companies, which tend to develop captive ecosystems.

Alibaba's Taobao platform, for example, supports payments via its own Alipay rather, but not the WeChat Pay technology of rival Tencent.

This year's shopping is being closely followed around the world as a guide to the state of China's crucial consumer sector, which is increasingly more important to the future of the world's biggest economy.

As the country emerges from the effects of the virus and tight lockdowns, the recovery in retail sales has lagged that seen in industrial sectors, but is gaining pace, analysts said. 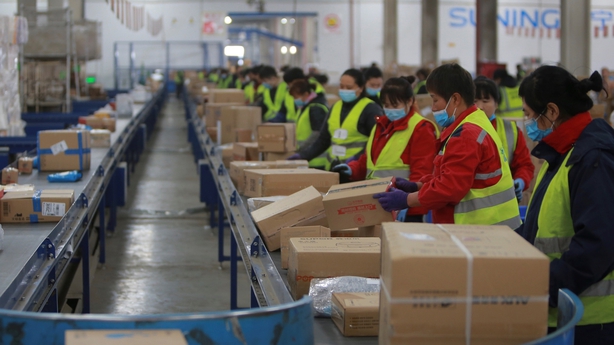 But e-commerce in China has expanded to include just about anything a consumer might purchase, including groceries, as digitally savvy Chinese opt for the convenience of online shopping.

The pandemic, which has made many Chinese wary of crowds, is furthering this trend, she said.

"We're expecting it to be another very, very strong year, another record," Sanders said.

"Retail in China is largely getting back now to last year's levels," she added.

Conceived in 2009 by Alibaba as an antidote to Valentine's Day, the event falls on the eleventh day of the eleventh month, and was meant to be an occasion for individuals to treat themselves to something new.

But it has expanded to encompass much of China's entire retail sector, including traditional bricks-and-mortar stores, which also offer "Single's Day" promotions.

Alibaba hypes its version of the promotion with a gala in Shanghai the night before, featuring a musical superstar guest - US singer Katy Perry was this year's main event, but her show was broadcast virtually.

The Economist Intelligence Unit said it expects China's retail sales recovery to firm in the last three months of the year - supported by the shopping festival.

"China's recovery from the coronavirus pandemic before other major economies will also support consumer confidence," it said.