Covid-19 continued to have a serious impact on the labour market here in the three months from April to June, according to new figures from the Central Statistics Office.

They reveal that at the end of June, the Covid-19 adjusted measure of unemployment had soared to 23.1% affecting 531,412 people - including those claiming the Pandemic Unemployment Payment.

The figures also reveal a drop in the total number of hours worked in the second quarter of the year, due to the increase in the number of people classified as "Away from Work" (employed but not working).

The CSO's Labour Force Survey is the official source of labour market statistics for Ireland.

Using the standard International Labour Organisation criteria, the unadjusted number of people who were unemployed in the second quarter of the year stood at 118,700 with an associated unemployment rate of 5.1% - but that rises to 23.1% when the effects of Covid-19 are factored in. 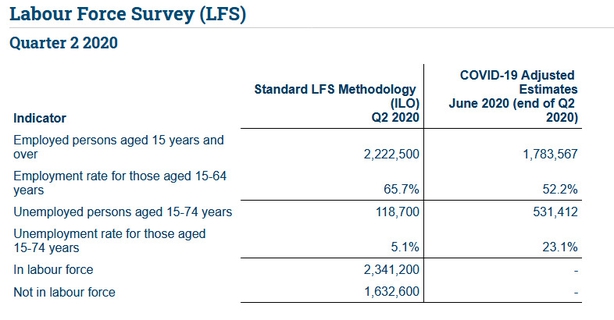 According to the CSO statistics, labour force participation fell to 58.9% in the year to last June, reflecting the lowest rate of participation since figures began to be compiled in 1998.

The long-term unemployment rate, which counts those out of work for at least one year, accounted for 21.6% of total unemployment in the second quarter.

The number of part time workers fell by 12.5%, while those in full time employment fell by 1.1%.

The biggest rate of decrease in employment was in the Accommodation and Food Services sector, with jobs in that sector declining by 29.6%.

Jobs in Administration and Support were down 17.2% while Construction employment fell by 12.1%.

The Irish National Organisation of the Unemployed noted that with the labour force down to 2,341,200, the labour market participation rate fell to 58.9% - below the lowest previous rate of 61.1% in the first quarter of 2013 when Ireland was still locked into the financial crisis.

Head of Policy and Media Breda O'Brien said that to be included in the official unemployment figures, respondents must have been actively seeking work over the previous four weeks, and be available to take up work in the coming two weeks.

She pointed out that some people answer no for a number of reasons including "... a lack of hope in finding a job, care and transport challenges, waiting for their former place of employment to re-open."

The trade union-funded Nevin Economic Research Institute described the findings on the impact of Covid-19 as "stark".

It noted that younger groups and those with lower levels of education were being disproportionately affected by Covid-19.