The euro zone economy will drop deeper into recession this year and rebound less steeply in 2021 than previously thought, the European Commission forecast today.

France, Italy and Spain are struggling the most due to the Covid-19 pandemic, the Commission noted.

The downbeat assessment of Europe's economy comes amid concern the US recovery may also be faltering as a surge of new coronavirus infections prompts states to delay and in some cases reverse plans to let stores reopen and activities resume.

The EU executive said the 19-nation single currency area would contract by a record 8.7% this year before growing by 6.1% in 2021.

The Commission said it had revised its forecasts because the lifting of Covid-19 lockdown measures in euro zone countries was proceeding less swiftly than it had initially predicted.

The EU executive significantly cut its earlier forecasts for France, Italy and Spain, all hit hard by the pandemic, and now expects now downturns in excess of 10% this year in each. 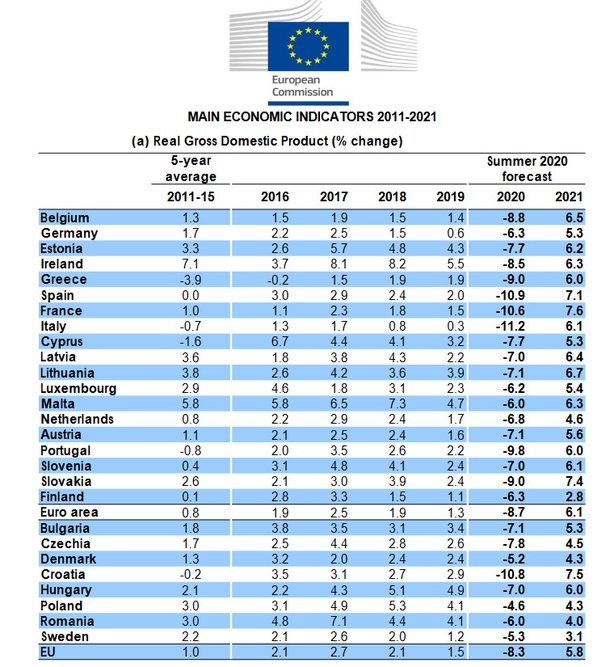 In Germany, the euro zone's largest economy, where widespread testing has helped limit fatalities, the Commission moderated its estimates both of 2020's downturn to a fall of 6.3% from an earlier prediction of a 6.5% drop forecast in May - and next year's rebound.

The Commission also said today that Ireland's GDP is projected to contract by 8.5% in 2020 and is expected to grow by 6.25% in 2021, on the back of the pent-up domestic demand release and the global post-crisis recovery.

Economics Commissioner Paolo Gentiloni told a news conference that to reduce risks of a second recession EU fiscal rules could remain frozen even after growth returns next year.

Requirements that states keep fiscal deficits below 3% of gross domestic product and reduce high debt have been suspended during the pandemic, in an unprecedented move.

Gentiloni, a centre-left former Italian prime minister, said the rules may be reactivated only when the bloc's output returns at least to 2019 levels. But no decision has yet been made and the matter remains controversial.

The Commission also said its inflation forecasts were little changed, at 0.3% this year and 1.1% in 2021.

The new growth figures indicate an economic recovery gathering momentum in June, although it is based on a number of "critical" assumptions, with "exceptionally high risks".

The forecasts assume no second wave of infections triggering renewed restrictions, although social distancing measures would persist, while monetary and fiscal policy measures are expected to support the recovery.

The main risks include a potential wave of new infections, more permanent scars from the crisis including unemployment and corporate insolvencies, and the absence of a future relationship deal between the EU and post-Brexit Britain.

"At the global level, the still rising rate of infections, particularly in the US and emerging markets, has deteriorated the global outlook and is expected to act as a drag on the European economy," the report said.

Asked about the impact on the euro zone economy of the fresh spike in Covid-19 infections in the United States, Gentiloni said that economic recovery was "paved with uncertainty", mostly caused by disease outbreaks.

He praised EU states' approach of gradually restarting their economies while maintaining measures to limit the spread of the virus.

Some reopening plans have been put on hold and restrictions placed on the bars, restaurants and other hospitality industry companies that helped the US economy add 4.8 million jobs in June.