The High Court has extended the examinership period protecting regional airline CityJet from its creditors for a further 30 day, after examiner Kieran Wallace of KPMG said he was confident a scheme of arrangement could be put to creditors.

Mr Wallace now has until 25 July to formulate that scheme of arrangement with CityJet's creditors in a bid to ensure the survival of the airline, which currently has debts of over half a billion euro.

The court heard that the examinership was progressing, and there had been a positive engagement with a proposed investor in the airline.

Counsel for the examiner, James Doherty, SC, acknowledged that there would be redundancies, but said the number of job losses had not been put before the court as negotiations were ongoing.

CityJet operates under a "wet-leasing" model, whereby it provides serviced aircraft and crews to operate routes on behalf of other airlines, including SAS.

Prior to the crisis the airline employed 1,175 people, 417 of whom are based in Dublin.

When it sought the protection of the courts in April, CityJet claimed it was insolvent due to financial difficulties exacerbated by the grounding of its fleet of 30 aircraft due to the coronavirus.

It said the pandemic had interrupted a planned merger with another airline and a proposed private restructure of the country.

The airline's creditors include the Triangle Group, firms involved in the leasing of aircraft, Investec, the Revenue Commissioners, as well as debts owed to related companies.

Mr Justice Michael Quinn refused an application by the pilots' union IALPA to extend the 30-day statutory notice period for redundancies, which is due to expire this week.

The judge said that the court did not have the jurisdiction to grant such an order in the context of an examinership hearing - but added that that did not preclude IALPA making a separate application to the courts in relation to any proposed redundancies.

IALPA President Captain Evan Cullen had also asked the court to rule that no redundancies should be notified to IALPA's 57 CityJet members until the matter is next before the court.

Captain Cullen also argued that such an extension would not affect the airline's finances, as the pilots remain on the Temporary Wage Subsidy Scheme.

Mr Justice Quinn asked lawyers for CityJet and Mr Wallace to take note of the concerns raised by Mr Cullen.

The judge also noted that the airline has recommenced flying routes on behalf of its biggest customer SAS, something the judge said was "welcome news." 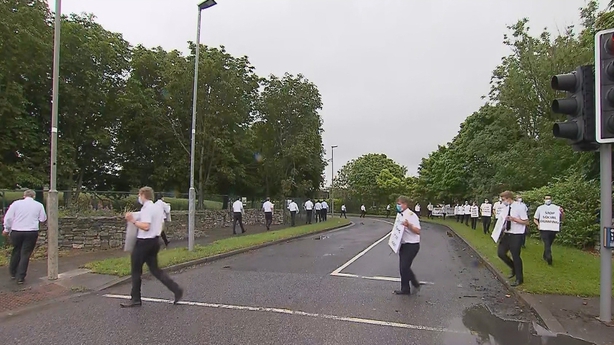 Earlier this week, around 25 pilots belonging to IALPA protested outside CityJet's north Dublin headquarters, accusing the airline of "offshoring" the jobs of Dublin-based pilots to workers based in Scandinavia.

The union insists that given that there are no Dublin-based operations at present, its members should be allowed to continue to commute to the Scandinavian "theatre of operations" to fly routes from there.

However, CityJet CEO Pat Byrne dismissed the union allegations, saying the priority was the survival of the airline.