The latest #murraytweetindex, which ranks the most influential Irish journalists on Twitter for 2019, shows that the top 100 in the index have over 3.3 million followers, an increase of 6% on 2018.

The index shows that Virgin Media's political correspondent Gavan Reilly has taken the number one spot, while RTÉ's Director of News Jon Williams is in second position and Today FM presenter Matt Cooper in third place.

In its sixth year, the #murraytweetindex - compiled by communications consultancy Murray - ranked over 700 journalists across six parameters, measuring popularity, quality of engagement and level of activity. 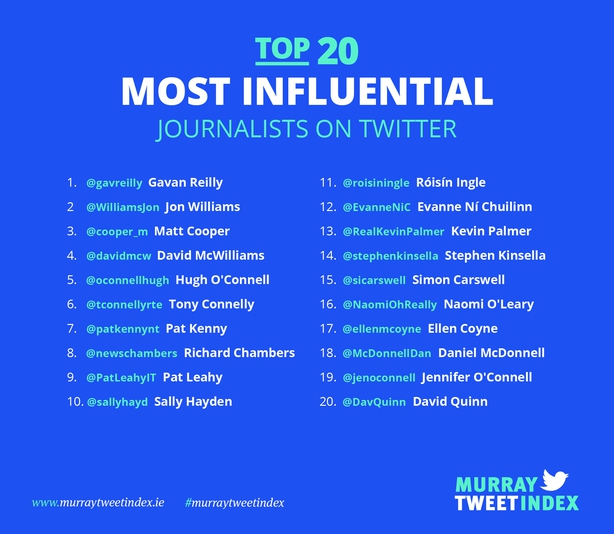 The index showed that during the current Covid 19-pandemic Twitter's role as a source of breaking news has been more prominent than ever.

RTÉ's Fergal Bowers - top of the health category - saw his follower count more than quadruple from 21,000 when the index data was compiled in December 2019, to over 88,000 today.

RTÉ’s new agriculture correspondent Fran McNulty topped the category as he started the job just as the beef price protests heated up last summer and RTÉ's Evanne Ní Chuilinn topped the most influential tweeter for sport..

Analysing the results by outlet showed that the Irish Times, at 24, had the most journalists in the top 100, followed by RTE with 17, and Independent News & Media with 14.

Newstalk came next with six, The Business Post with five, Joe.ie/Maximum Media with three and the Sunday Times/The Times, Virgin Media, the Irish Examiner, the Irish Daily Star and The Currency all with two. 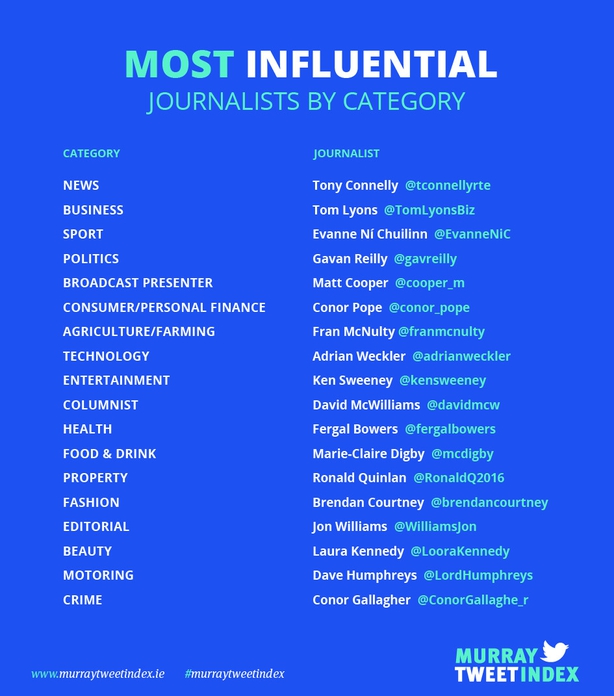 The index also showed that David McWilliams retained the position of having the most followers on Twitter, adding over 18,000 followers since last year.

Sports journalist Ewan McKenna was the most prolific Tweeter with an average of 60 tweets or retweets per day, followed by Irish Daily Mail food and drink writer Tom Doorley with 56.

Doug Keatinge, Director at Murray, who led the research said, said that a well thought out Twitter thread can provide a first draft of history with as much impact as a news package or column.

Doug Keatinge said that for the first time the index looked at the proportion of female journalists in the Top 100, which at around 30% is similar to disparities at a senior level in the corporate sector.

"Like many other career paths, women remain under-represented, and a higher proportion of strong female journalist voices in the index would be welcome," he added.

"From a commercial perspective Covid-19 looks to be accelerating the structural shift to online news consumption. Now more than ever platforms like Twitter will play an important role in promoting content and guiding readers to the websites where they can find what they are looking for," Mr Walsh added.