New figures from the Central Statistics Office show that residential property prices increased by 1.1% nationally in the year to February.

While the February data suggested a continued stabilisation in the market in the first two months of the year, a series of restrictions to slow the spread of the virus were implemented in March with a stay-home order in place at least until May 5.

Just 700 transactions were added to the Property Price Register in the week to April 15, almost 40% lower than the weekly average in January and February.

Estate agents had stopped viewings before the restrictions were tightened late last month.

Mr MacCoille said the restrictions could push transactions to a negligible level and even prevent the CSO from publishing a house price inflation reading for April.

"Ultimately, a functioning housing market will require the COVID-19 business restrictions to be relaxed - making questions on where house prices go redundant for now," the economist said.

"It is possible that transactions could bounce back in Q3 if the restrictions are relaxed, but almost certainly not sufficient to make up for the disruption early in the year," he added.

House prices have stabilised over the last year having shot up for five years following a strong economic recovery from a property crash a decade ago.

However the economic shutdown has more than trebled the unemployment rate to 16.5% - at least temporarily - and consumer sentiment suffered its largest monthly drop on record in April, a survey showed earlier this week.

The Central Bank has estimated that gross domestic product could fall by 8.3% in 2020 and that unemployment could reach 25% before falling back to 12.6% at the end of the year, assuming the current containment measures last three months. 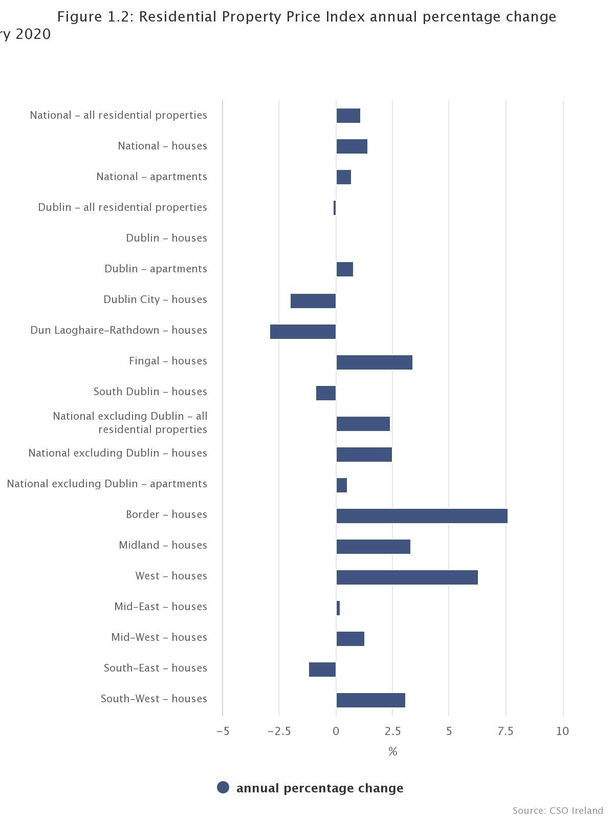 Today's CSO figures show that Dublin residential property prices decreased by 0.1% in the year to February, with house prices seeing no change and apartments increasing by 0.8%.

The highest house price growth in Dublin was in Fingal at 3.4%, while Dun Laoghaire-Rathdown saw a decline of 2.9%.

Residential property prices in the rest of the country rose by 2.4% in the year to February, with house prices up by 2.5% and apartments rising 0.5%.

The CSO said that the region outside of Dublin with the largest rise in house prices was the Border at 7.6%, while at the other end of the scale, the South-East saw a 1.2% decline in prices.

Today's figures show that property prices nationally have increased by 83.1% from their trough in early 2013.

Dublin residential property prices have risen 93% from their February 2012 low, while prices in the rest of Ireland are 81.5% higher than at the trough in May 2013.

The CSO said that consumers paid a median price of €260,000 for a home in the 12 months to February.

Today's figures show that in the year to February, 45,340 household dwelling purchases were filed with Revenue.

Revenue data shows that there were 960 first-time buyer purchases in February, an increase of 5.8% on the 907 recorded the same time last year.

These purchases were made up of 243 new homes and 717 existing homes.