A new measure of unemployment shows that the jobless rate reached as high as 16.5% in March, new figures from the Central Statistics Office show today.

The CSO said that the Covid-19 crisis had a significant impact on the labour market in Ireland in March.

It said the standard measure of Monthly Unemployment was 5.4% in March, up from 4.8% in February.

But the new Covid-19 Adjusted Measure of Unemployment could indicate a rate as high as 16.5% if all claimants of the Pandemic Unemployment Payment were classified as unemployed, the CSO said.

The CSO said that the 283,037 persons in receipt of the Covid-19 Pandemic Unemployment Payment at the end of March do not meet the internationally agreed criteria to be considered as unemployed for the purposes of the compilation of the standard Monthly Unemployment Estimates.

It said, therefore, it has produced a supplementary measure of unemployment in parallel with the routine monthly unemployment estimates. 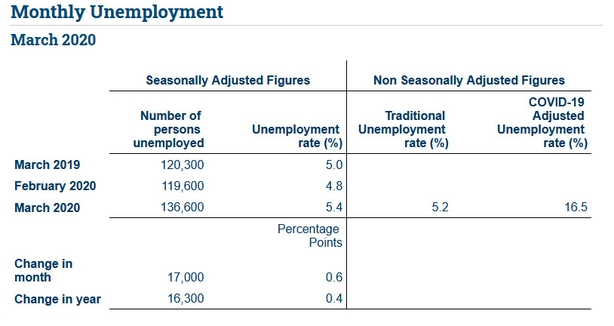 Today's figures do not yet capture the increasing number of people who started receiving Pandemic Unemployment Payments since the end of March.

The new COVID-19-adjusted unemployment measure was based on the 283,037 people on the higher emergency payment and 207,200 on regular benefits at the end of the month.

A further 224,000 received the emergency payment in the first three days of April, new figures showed on Monday.

That implied an additional coronavirus-adjusted jump in the unemployment rate to 26% already this month, Davy Stockbrokers chief economist Conall MacCoille estimated this week.

A further 25,104 on the new temporary wage subsidy scheme at the end of March, a number that has also shot up since, are not included in the adjusted unemployment measures as they retain an attachment to their employer, the CSO said.

Such employees remain on company payrolls but the state is paying 70% of their wages up to a maximum of €410 a week.

"This new Covid-19 Adjusted Monthly Unemployment measure should be considered as the upper bound for the true rate of unemployment and the standard monthly rate as the lower bound," the CSO's senior statistician Edel Flannery said in a statement.

The largest previous increase in a single month was a one percentage point jump just over a decade ago and it took more than four years for the series to climb to the post-financial crisis high of 16% in 2012.

The highest unemployment rate recorded since the CSO began publishing the series 37 years ago was 17.3% in 1985 when Ireland was a much poorer country.

While the Central Bank expects the unemployment rate to hit around 25% during the second quarter, it predicted a fall back to 12.6% by year end if the current containment measures against the virus last three months.