The Irish betting group estimated a month ago that it would take at least a £90-110m hit to its full-year earnings if curbs on sports fixtures remained in place until the end of August.

It had also flagged a possible further £30m rolling monthly hit if horse racing was cancelled in Britain, Australia and Ireland and its betting shops closed.

While racing has been suspended in Ireland and the UK, and all Paddy Power stores shut, its continuation in Australia limited the year-on-year decline in revenue from March 16 to April 12 to 32%.

This was less of a sports hit than the gambling group had expected.

Sportsbet gained new customers due to the closure of retail betting outlets throughout the country.

With big events like the English Premier League on hold and the 2020 European Championships postponed, the list of competitions on the Paddy Power mobile phone app now includes Belarusian reserve league and Tajikstani top flight soccer.

Before the raft of sporting cancellations that began in March, Flutter said trading had been running ahead of expectations.

Group revenue was up 16% in the first quarter, including the disruption towards the end of that period.

It reported further progress in the US, where it merged its local unit with fantasy sports company FanDuel in 2018, with first quarter revenue growth of 72% and 100,000 new customers keeping its lead in the fast growing market with a share of 41%. 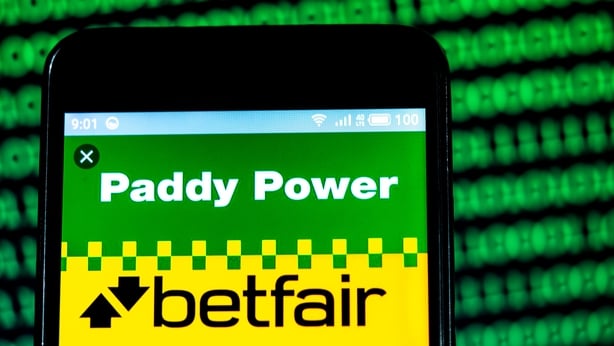 Flutter also said last month that it would pay its 2019 dividend in ordinary shares, shelve a pro-rated dividend in relation to its merger with The Stars Group and suspend the 2020 dividend for the combined group.

The $6 billion share deal agreed last October to buy the Canadian group is set to create the world's largest online betting and gambling company by revenue. Flutter reiterated today that the coronavirus challenges underlined the need for further product and geographic diversification.

The Competition and Consumer Protection Commission yesterday cleared the proposed merger of Flutter with the Canadian group.

In today's trading update, the company said it was monitoring closely the outlook for the re-commencement of sports and will provide further updates as and when appropriate.

It also said that it has concluded that for as long as possible, it will endeavour to fund the salaries of all of its employees through the group's own financial resources.

"Should the duration of the crisis be such that not taking this support would jeopardise jobs, we will review our position," the company said.

Shares in the company jumped higher in Dublin trade today.