Samsung has unveiled a new foldable smartphone alongside its latest flagship devices, which include new high-powered cameras and wider support for 5G.

They were unveiled alongside the Galaxy Z Flip, the tech giant's new folding phone.

The device opens and closes vertically, much like classic flip phones from the early 2000s, and also features a smaller outer screen which displays notifications when the device is shut.

Samsung's Rebecca Hirst said the Z Flip was "another giant step forward" for the company, describing it as a "new kind of device for a new decade of innovation".

The foldable will go on sale later this month, Samsung confirmed. 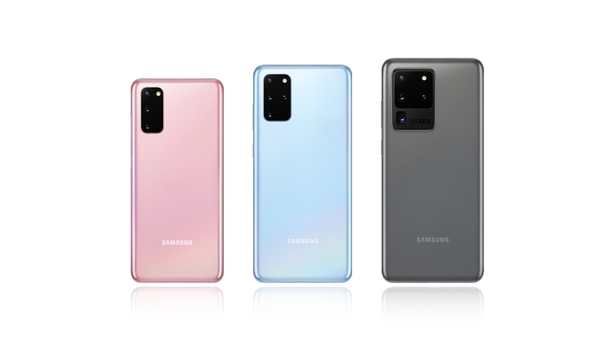 It was introduced at a live event alongside three new versions of the company's flagship Galaxy S20 range.

All three of the new phones feature what Samsung calls Space Zoom, a new feature in the rear camera system which will allow users to zoom in up to 30 times on the S20 and S20+, and up to 100 times on the S20 Ultra - previously unheard of in a smartphone.

For the first time, Samsung also confirmed that all of the devices in the range support 5G data networks.

The Korean technology giant has focused on improving the experience of using the cameras on its new phones, as it looks to capitalise on the increasing popularity of smartphone camera use, particularly for social media apps such as Instagram, Snapchat and TikTok.

As a result, Samsung has also introduced a new camera feature called Single Take Mode, which enables users to capture photos and videos from all of the individual camera lenses at once, giving them a portfolio of different content to choice from to post to social media.

The tech giant will hope the new devices can solidify the company's position as the largest smartphone manufacturer in the world, ahead of closest rivals Huawei and Apple.

Huawei has been hit by its US trade ban, while Apple reported slowing iPhone sales during 2019 - although it did reveal stronger figures in its most recent financial results.

Technology industry expert Ben Wood from CCS Insight said Samsung's use of 5G across the S20 range could help it stand out in the crowded smartphone market.

"Samsung is continuing its metronomic updates to its Galaxy flagship devices with the S20 family," he said.

"The challenge, which it faces together with all other smartphone makers, is how to stand out from the endless stream of similar-looking black touchscreen rectangles.

"The support for 5G across all three variants of the S20 line-up is a key element, ensuring customers are getting a future-proof purchase and the camera certainly stands out, particularly on the Flagship S20 Ultra."