Everyone knows that the global corporate tax system needs to be overhauled, Apple's chief executive Tim Cook said today, backing changes to global rules that are currently under consideration.

The growth of internet giants such as Apple has pushed international tax rules to the limit, prompting the Organisation for Economic Cooperation and Development (OECD) to pursue global reforms over where multinational firms should be taxed.

"I think logically everybody knows it needs to be rehauled, I would certainly be the last person to say that the current system or the past system was the perfect system," Tim Cook said today in Dublin.

"I'm hopeful and optimistic that they (the OECD) will find something," Mr Cook said.

"It's very complex to know how to tax a multinational. We desperately want it to be fair," the Apple CEO added after receiving an inaugural award from IDA Ireland to recognise the contribution of multinationals in the country.

Taoiseach Leo Varadkar said today that the Apple tax case is sub judice and is a matter for the courts to decide.

Apple is one of Ireland's largest multinational employers with 6,000 workers and both it and the Government have gone to court to fight a European Union order that Apple mus tpay €13 billion in back taxes to Dublin.

The appeal to the EU's second-highest court began in September and could run for years.

Tim Cook said Apple's belief that "law should not retrofitted" was at the heart of the case and that the company had great faith in the justice system.

Tim Cook told the audience at the National Concert Hall today that the company "could not be more grateful" for the partnership it has enjoyed with Ireland and Cork over the past 40 years. 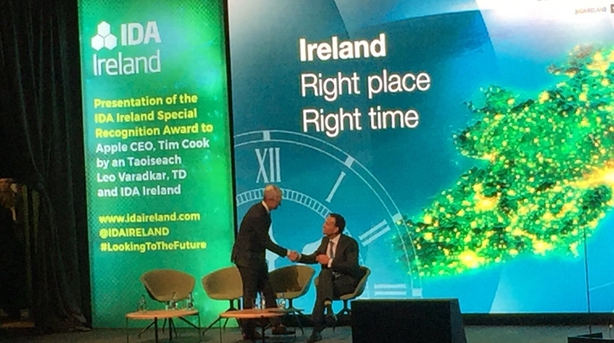 The company located its first factory in Cork in 1980, employing 60 people.

The Apple CEO also said that more regulation was needed in the area of privacy and must go further than the 2018 European General Data Protection Regulation (GDPR) privacy laws that handed regulators there significantly more powers.

"I think more regulation is needed in this area, it is probably strange for a business person to be talking about regulation but it has become apparent that companies will not self-police in this area," he said.

"We were one of the first to endorse GDPR, we think it is overall extremely good, not only for Europe. We think it's necessary but not sufficient," Mr Cook said.

"You have to go further and that further is required to get privacy back to where it should be," he added.