Aer Lingus has today revealed its new look uniform which will be worn by over 4,000 cabin and ground crew around the world from February 10.

The new uniform has been created by Irish fashion designer Louise Kennedy.

Aer Lingus said the new look reflects its "status as a modern international airline with a proud Irish heritage".

It is the final stage in the airline's brand refresh.

25 new garments have been designed giving crew and ground staff a greater variety of styles from which to choose.

Notable changes include the addition of trouser and dress options, as well as new jacket and coat designs for male crew, and easy-care shirts and blouses.

All materials used in the new uniforms have been sourced and manufactured in an ethically responsible manner to minimise environmental impact, Aer Lingus said. 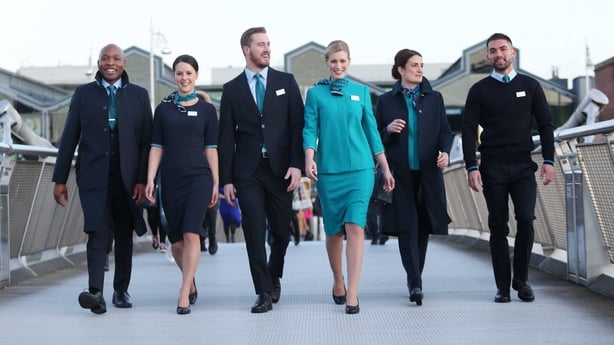 Listen: In 2018, Richard Curran spoke to sister Louise and Caroline Kennedy on The Business

Read more:
Archives: Aer Lingus uniforms down through the years

The airline's first uniform was a military-style rich brown suit designed by Sybil Connolly in 1945, which then became green a few years later in 1948.

"As with our logo and livery, our new uniform needs to reflect the modern, international airline that Aer Lingus is today; while also ensuring that our unique identity is retained and our values as an airline are reflected," commented Aer Lingus chief executive Sean Doyle.

"Louise Kennedy has achieved that in the uniform that we are unveiling today, and it is the final step in a process that has seen over 500 points rebranded over the last 12 months," he added.