In the not-too-distant future you could travel on one, two or three wheels - or maybe none at all.

Tech-inspired solutions for mobility - on land, air and water - featured prominently at the 2020 Consumer Electronics Show in Las Vegas.

Some innovators played with long-established ideas like the bicycle or scooter by adding artificial intelligence, electric power and other technologies.

With bold and striking designs, the new transportation gadgetry suggests a wild ride ahead:

Autonomous and shared vehicles intended to curb traffic and emissions were front and centre at CES this year.

Swiss-based group Rinspeed showed its latest "modular mobility" vehicle "Metrosnap," which is built on a skateboard-like chassis and looks like a futuristic minibus.

Different components can be swapped in to accommodate passengers, deliveries or even a mobile retail outlet.

"If there is demand, it can transport people, and then if there is a need to move goods, it can be adapted for that as well," said Bosch's Andrew Yip.

"People want something more than (transit) where they are tied to rigid schedules and pickup stations," he said.

Adaptations of the bicycle, infused with new tech for the connected generation, appeared at CES.

French startup Wello showed its open-sided, three-wheeled car-bike that relies on pedaling, electric power and solar panels on the roof, already in use by French postal services.

"It's 100% sustainable because it produces energy from the solar panels."

Also seen at the show was an off-road electric cargo bike from Sweden-based startup Cake, which riders can customise for various kinds of trips.

"You can commute to work, pick up your groceries and then grab your surfboard and head to the beach," Cake spokesman Garin Fons said of the two-wheeler.

Another electric-assisted tricycle concept from Italian startup Measy adds another dimension: a cargo bay for a small delivery robot that can be set free to bring goods inside buildings. 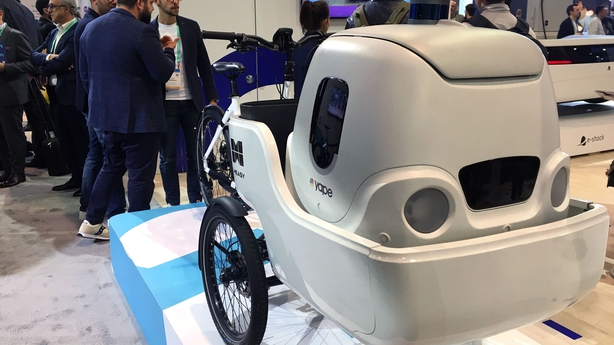 "This is a concept for multimobility," said Measy engineer Matta De Santis, demonstrating with a robot from fellow Italian startup Yape.

"If you take a train to work, you can use this for the first mile or last mile," said Smacircle's Darren Pike of the e-bike, which is only 53 centimetres (20 inches) high and weighs just over 10 kilos (24 pounds).

Some models presented a more outlandish way to get from A to B. 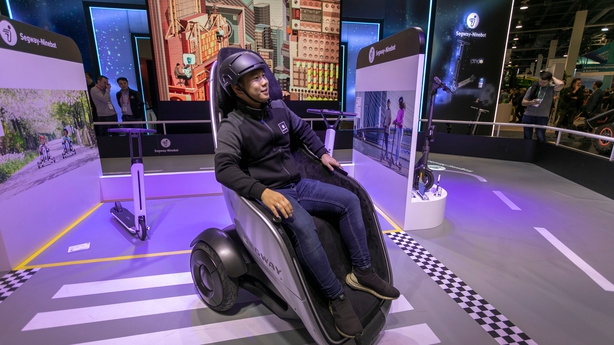 According to Segway, the new personal transport pod can travel up to 24 miles (39km) an hour and is designed with intuitive controls to avoid tipping over.

"Our founder had a dream that he was riding a bicycle, and he saw dolphins, and that's how this started,"  said spokesman Louis Wilks.

The Manta5 hydrofoiler, with variable electric power assistance, is "a new category of water sport" that is quiet, environmentally friends and allows you "to see directly into the water," Wilks said.

Flying above the crowd

Some CES exhibitors said the best way to cope with traffic on the ground is to rise above it.

Aeronext unveiled a scaled-down model of its "flying gondola" designed as a personal transporter.

The gondola uses so-called "4D gravity" to keep the passenger compartment stable even during turbulence.

"This is original technology. Conventional air mobility drones are not stable," said Keisuke Toji, chief executive of the group, which has offices in Japan and China.

Toji said the company hopes to have a working prototype in the next year as it moves toward commercialisation. 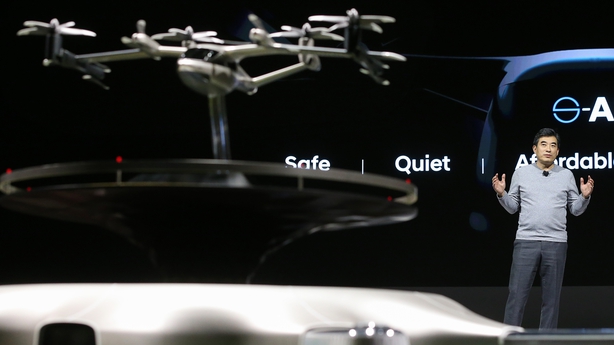 Putting it all together

The vast array of new transport options could lead to a more sustainable future, but only if coordinated, Accenture's Reers said.

Hyundai proposed a network of hubs to connect various forms of personal and mass transit with stations for its drones.

Toyota said it would create a "woven city" in Japan, powered by hydrogen fuel cells, where it would test autonomous driving and related technologies.

At the moment, Reers said cities have resisted new modes of transport like scooters because they don't fit into the ecosystem, highlighting the need for better planning.

"These new developments create huge opportunities to manage the system in a more sustainable way," he said.

"Instead of looking for the next big thing, we should be thinking about making things work together," Reers said.