International Airlines Group's long-serving chief executive Willie Walsh has revealed plans to retire from the Aer Lingus owner after a 15-year career with the group.

Mr Walsh will stand down from the role and from the board of IAG on 26 March this year and will retire on 30 June.

Mr Walsh has spent his career in the airline industry and has been instrumental in establishing IAG.

He became CEO of British Airways in 2005 and oversaw its merger with Iberia in 2011 to form IAG. He has since expanded IAG through acquisitions.

In November, Mr Walsh said he planned to retire before his 60th birthday on October 25, 2021.

"I still love what I do, but my intention is to be retired within the next two years," he had said.

In a statement today, Mr Walsh said that it had been a privilege to have been instrumental in the creation and development of IAG.

"I have had the pleasure of working with many exceptional people over the past 15 years at British Airways and at IAG.

"Luis has been a core member of the team and has shown true leadership over the years and I have no doubt he will be a great CEO of IAG," he added.

IAG chairman Antonio Vazquez said that Mr Gallego was the right candidate to lead IAG in the next stage of its development.

Goodbody analyst Mark Simpson said the appointment would mean little change in IAG's strategy and would be welcomed by investors.

Willie Walsh had "fantastic success at building IAG but obviously promoting internally is seen as a positive. The market regards his successor well," Simpson said.

Mr Walsh made his name standing up to unions and cutting costs first at Aer Lingus, where he became CEO in 2001, and then at British Airways.

This earned him the nickname "Slasher Walsh" in an industry he once characterised as a "fight for survival".

It was at Aer Lingus where he formed the template for his strategy, benefitting from a front-row seat to the rapid expansion of budget rival Ryanair.

He also bought Aer Lingus in 2015, and IAG is currently in the process of a €1 billion deal to buy Spain's Air Europa. 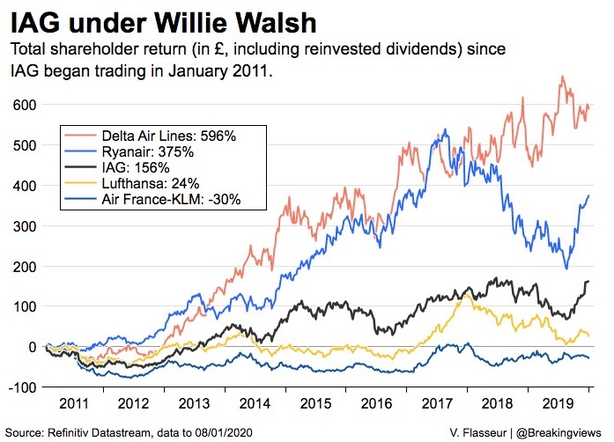 IAG said Mr Gallego's successor at Iberia will be announced in due course.

Mr Walsh's earlier than expected exit from IAG follows an unfortunate 2019 for BA, which has been forced to warn over profits after a summer of industrial action.

The first pilots' strike in BA's history saw the UK flag-carrier cancel thousands of flights in September amid a long-running dispute over pay.

Mr Walsh has not yet disclosed his plans for life after IAG, but will no doubt be asked about this when the group unveils its full-year results on February 28.

Mr Walsh started his career in the industry as a cadet pilot for Aer Lingus in 1979 before working his way up the ranks to become chief executive of the Irish airline in 2001.

He then became chief executive of BA in 2005 until its merger with Iberia six years later, when he was appointed to head up the wider IAG group.

Mr Walsh succeeded in snapping up Aer Lingus in 2015 after overcoming a long-running feud with low-cost Irish rival Ryanair.

Ryanair - led by outspoken boss Michael O'Leary - finally agreed to sell its stake in Aer Lingus to IAG, having itself tried to buy the carrier several times. 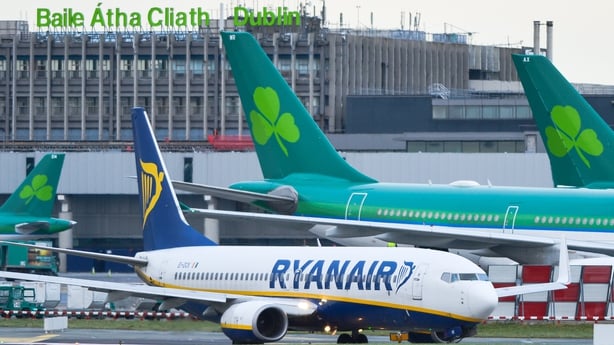 Mr Walsh and Mr O'Leary have been fierce rivals over the years, but have also admitted admiration for each other and have often joined forces on industry issues, such as airlines taxes.

While Mr Walsh will be a hard act to follow at IAG, his successor - Iberia CEO Luis Gallego - is seen as a strong choice.

James Goodall, airlines analyst at Redburn, said: "IAG has good succession planning in place and we see the promotion of Luis Gallego to group chief executive as a good option.

"Luis has an exceptional track record, turning around Iberia over the past five years," he added.

Market reaction to the management changes was positive, with shares in IAG trading up 1.1% in London.