Banks have paid out a total of €683m in redress, compensation and costs to 40,100 customers who were affected by the "distressing" and "devastating" tracker mortgage controversy.

The Central Bank said this is up from 39,800 customers at the end of February, when banks had paid out €647m in redress and compensation.

In its final report on its Tracker Mortgage Examination, the Central Bank said it was satisfied that affected customers have now been identified, that redress and compensation is almost complete and that the supervisory phase of its examination can be concluded.

But it added that it will continue to monitor the outcomes of any complaints, appeals and court cases and if any new information comes to light, it will investigate.

Today's report noted that 99 homes were lost as a result of the banks' failings, while another 216 buy-to-let properties also saw a loss of ownership.

It also said that the average redress and compensation paid in respect of the loss of a home stood at €194,000 and the average for a buy-to-let property was €162,000. 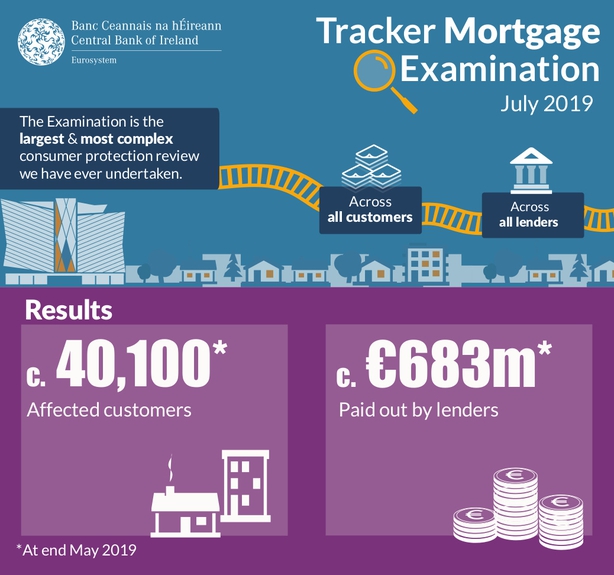 According to the Central Bank, offers of redress and compensation have been made in respect of 98% of affected accounts.

In the case of the small number of customers who have proved uncontactable to date, the Central Bank has told lenders to hold their redress and compensation in a special ring-fenced account.

Finance Minister, Paschal Donohoe, described today's report as a 'searing insight into the misery caused to mortgage holders and their families because of how they were treated by the banks'.

He said it was also an insight into what he said was 'unacceptable' behaviour by the banks.

The Minister said that kind of behaviour had inflicted 'huge human suffering and cost', and he said 'people had been let down and trust corroded' by what he said was 'appalling' behaviour.

He said 'homes had been lost and lives shattered'.

The Central Bank made lenders set up an independent appeals process and said that so far, 10% of affected customers have lodged appeals.

In May, the Central Bank fined Permanent TSB €21m in respect of its "serious failings" which affected 2,007 of its tracker mortgage customer accounts.

The fine was the biggest ever imposed by the Central Bank under its sanctions procedure.

The Central Bank said that enforcement investigations against all the other main lenders continue.

"It required an unprecedented regulatory response in the shape of the Tracker Mortgage Examination, the largest, most complex and significant consumer protection review the Central Bank of Ireland has ever undertaken," Ms Rowland said.

"The outcome of our first enforcement action, which resulted in the largest fine imposed to date by the Central Bank, reflects the gravity with which we view lenders' tracker failings," she added.

Ms Rowland said the bank's examination revealed the unacceptable damage that misconduct can cause to consumers up to and including the loss of their homes and properties in some cases.

"Our message today - to all the firms we regulate - is very clear: Where firms fail to protect their customers' best interests, our response will be robust and the consequences will be serious," she warned. 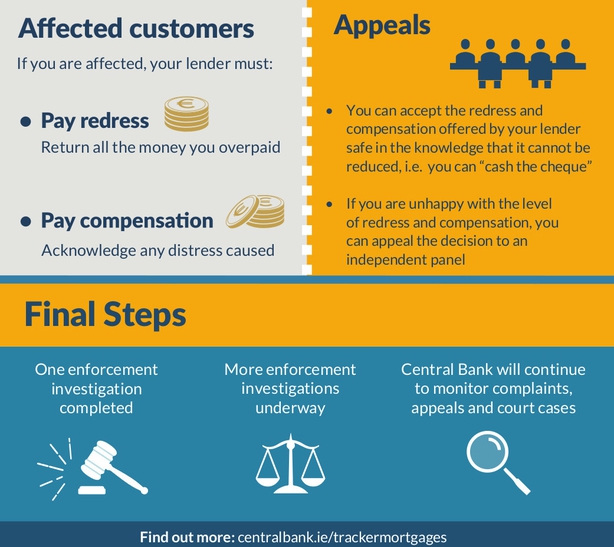 The tracker investigation began in 2015, when the Central Bank ordered lenders to look through their records to identify any customers who had wrongly been moved from or denied tracker mortgages, which follow the ECB main lending rate when it goes up and down.

The controversy is the biggest overcharging controversy in the State's history and the Central Bank said its examination, which involved an initial review of more than two million mortgage accounts, was the biggest, most complex and significant consumers protection review it has ever undertaken.

At the request of the Minister for Finance, the Central Bank conducted a review of the behaviour and culture of the five main Irish banks.

It said that while the reviews had found that all five banks had taken steps to reinforce consumers' interests, the "consumer-focused culture" at the five banks remain under-developed and all still have a "considerable distance to travel".

The Minister for Finance said the tracker scandal has left a significant mark and it will take some time to restore the reputation of the banking sector.

"However, this will not be done by words alone and can only be demonstrated by real actions over time where banks demonstrate that they are acting in the best interests of their customers," Paschal Donohoe said.

Mr Donohoe said it remains "utterly unacceptable" that impacted customers should have been put in such a position in the first instance.

"It is with the deepest of regrets, I note that 99 private dwelling homes and 216 buy to let properties have been lost by customers because of the tracker failures of lenders," he added.

Fianna Fáil's spokesperson on Finance Michael McGrath said the Central Bank has signed off on its Tracker Mortgage Examination prematurely given that issues remain unresolved for a large number of affected customers.

"It is clear that some lenders have dragged their feet at every opportunity and prioritised their own interests over the welfare of customers who were wrongfully denied their tracker rates," Mr McGrath said.

He also said the issue does not stop with today's report, adding that not everyone has received their redress and compensation in full, while the prevailing rate issue involving 6,000 AIB customers still remains unresolved.

"No doubt many of these issues and others will end up in the Financial Services and Pensions Ombudsman and even the courts.

"In closing their Tracker Mortgage Examination today, the Central Bank has essentially come down on the side of the banks in respect of all cases that remain in dispute," Mr McGrath said.

He said the Central Bank now must step up its efforts on its enforcement investigations into the tracker mortgage scandal.

"PTSB is the only lender to have been fined a record €21m due its role in the scandal.  It is critical that every lender involved is held responsible for their actions", Deputy McGrath concluded.

Meanwhile, Sinn Féin's finance spokesperson Pearse Doherty said that it was worth noting that only 40% of the cases would have been included if the banks left to their own devices.

The Central Bank had to engage 220 times with the lenders to get to this point, he said.

Mr Doherty also said that despite the publication of the Central Bank's final report, there is still some way to go, including through the court system, for hundreds of customers.

He said that transparency must remain central in the remaining cases, adding that the Financial Services and Pension Ombudsman has informed him that there are 1,400 cases related to trackers with the body.