The €14.3 billion paid by Apple in backdated taxes and interest to the State was deposited in an escrow account set up by the Government last year.

The Department of Finance is appealing the EU Commission decision as it rejects the view that there was a "sweetheart deal" in place for Apple.

At the Public Accounts Committee today, Derek Moran, Secretary General of the Department of Finance, indicated that the case could take many years.

Responding to questions from Fine Gael's Peter Burke, Mr Moran said: "We had an expectation of having a preliminary hearing this side of the summer but that has not happened.

"In my experience, by the time this gets through the full process of litigation, up to and including the ECJ [European Court of Justice], this will probably be several years."

Deputy Burke asked if it could take a decade and Mr Moran replied that he is aware of one state aid case that is significantly more than a decade."

Mr Moran said there is nothing quite like the scale and magnitude of this case as it involves €14.3 billion.

He said he does not think there has ever been a state aid case right across Europe where that level of money has been recovered.

Mr Burke asked how much has been spent by the State on legal costs to date to which Mr Moran replied that expenditure to date has run to about €7.1m and €3.7m of that relates to the establishment of the escrow account.

He pointed out that he would contrast that with the potential cash flow loss of a negative interest in a year - which could have been as much as €60m.

Mr Moran said the Department does not have a fixed projection of the overall legal costs associated with this case.

"On the legal costs part of it, it is about €3.4m to date, excluding the escrow of which the department has met about €2.5m".

But he also acknowledged that "it has the potential to be significantly more than that."

Mr Moran said the costs so far run from 2014 onwards, adding that about €2.3m has been spent on legal services, €90,000 on translations as the documents can be in French and other expenses of about €60,000."

He acknowledged that the case will take a number of years, adding that it "is a complex issue".

"Large chunks of the senior management" in Irish banks are leaving their jobs for higher pay in banks that are not subject to the €500,000 bankers' pay cap, according to the Secretary General of the Department of Finance. 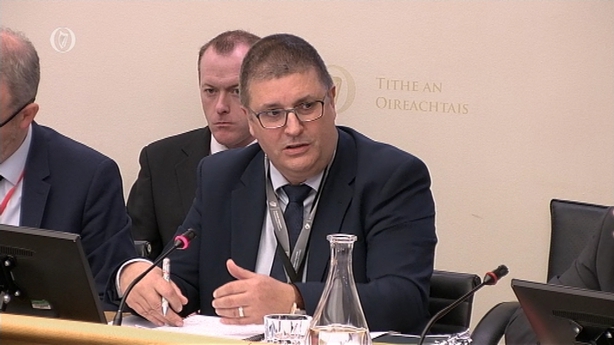 Derek Moran also told the Public Accounts Committee that "cannibalisation of staff" by financial institutions that have arrived in Ireland is due to the "Brexit bonus".

He said his department has received a report from consultancy firm Korn Ferry, after been asked to carry out a review of remuneration across bailed out banks.

"We have had a massive increase in the size of the financial system and we have had a lot of cannibalisation of staff in the system," he told the committee.

He said that he has anticipated that Finance Minister Paschal Donohoe will be consulted about the report "in the next number of weeks" when the Central Bank has responded to it.

Responding to questions from Fianna Fáil's Marc MacSharry, Mr Moran said: "We understand the reason for a pay cap. But we are seeing large chunks of the senior management in the banks in which we put shares being taken out and going for much higher levels of pay elsewhere."

"The arrival of large financials from London as part of, if you want to call it, the Brexit bonus is having that effect. It's drawing staff off," he added.

Asked if he would expect a recommendation to remove the cap, Mr Moran said that the Central Bank would like to see stability within the domestic banking sector.

The Department is waiting to see if it is the Central Bank's view that this is providing a threat to the viability and stability of the banks.

Mr MacSharry said the public will be interested to know if the salary caps are to be removed. Mr Moran said that would be a decision for the Government.