The pound was up slightly against the euro today after 14 days of losses as Prime Minister Theresa May set out a departure date after two years of trying to push through a Brexit divorce deal.

Trading was volatile as concerns rose that she is likely to be succeeded by a Eurosceptic leader, potentially increasing the chances of a 'no-deal' Brexit.

While there is no clarity on who Mrs May successor will be, markets are concerned that a tougher stance with the European Union might prompt investors to turn more negative on the outlook for the pound in the coming months.

Those concerns have pulled the rug from under the pound over the last two weeks.

They also prompted traders to sell the currency against the euro and the dollar aggressively and dialled up expectations of Britain crashing out of the EU without a deal.

Against the dollar, the pound was 0.2% higher at $1.269 after Theresa May's announcement.

The pound was a 0.1% stronger against the euro at 88.2 pence after 14 consecutive days of losses as traders trimmed back some of their negative bets on the pound before a long weekend.

Britain's markets are shut on Monday for a bank holiday.

Recent falls in the pound have been pronounced because investors have cut back their positions on the pound to neutral, removing any potential support for the British currency.

But derivative markets were broadly quiet with risk reversals on the pound holding near recent lows while one-month volatility indicators remained subdued. 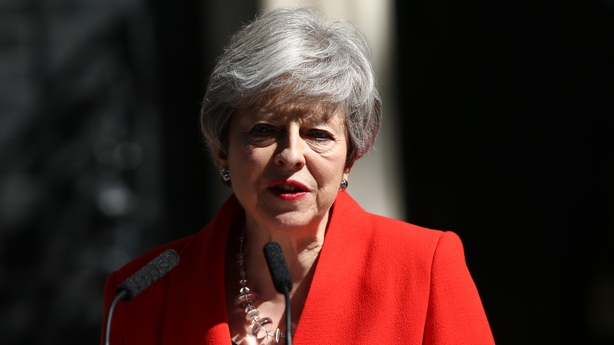 The leading contenders to succeed May all want a tougher divorce deal, although the EU has said it will not renegotiate the Withdrawal Treaty it sealed in November.

Boris Johnson, the face of the official Brexit campaign in 2016, is the favourite to succeed May. Betting markets put a 40% implied probability on Johnson winning the top job.

Strategists at Oanda, a futures brokerage, say if Boris Johnson becomes the next prime minister, the pound could fall as far as $1.20, a level not seen since the first quarter of 2017.