The Mobile World Congress (MWC) technology convention is drawing to a close in Barcelona, with foldable phones among the most notable innovations appearing on the show floor.

However, the four-day event also attracts a number of unique and unusual devices to its halls, as manufacturers look to strike a balance between being innovative and standing out from the rest of the crowd.

Here is a round-up of some of the more interesting products at the show.

Battery firm Energizer has been showing off a phone designed for those who do not ever want to worry about charging their device.

The Power Max P18K Pop has an 18,000mAh battery - which is about seven times the capacity of the iPhone XS.

However the size of the phone is what it is likely to be remembered for - similar in thickness to three other smartphones stacked on top of each other, it is also fatter than many external battery packs.

Robotics is often a big draw at tech trade shows, and this year's MWC was no different, with the Roboy the most eye-catching of them all.

The device is said to take inspiration from the complex biology of the human body, and hopes to advance the development of humanoid robotics to a position where "its robots are just as good as a human body".

The device is also being developed open source, enabling anyone to contribute to its development.

Sony's mobile business has struggled to keep up with the market leaders of Samsung, Huawei and Apple in recent years, leading the company to explore new ways to appeal to mobile users. 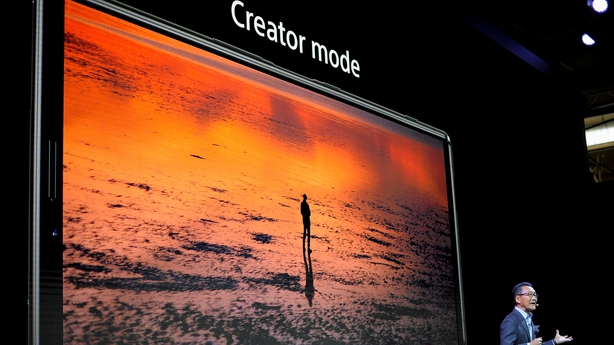 At MWC, the Japanese firm announced its new flagship, the Xperia 1, a phone Sony says is the first to feature a 4K resolution OLED display, while also being set in 21:9 aspect ratio - similar in shape to a cinema screen.

The result of that design is a smartphone unique in shape, the Xperia 1 is longer and slimmer than many other flagship smartphones on the market.

Sony says the design makes the new Xperia 1 a standout way to watch films and TV, however, its size does raise questions in terms of fitting into the pockets of everyday users.

What is certain is that Sony's mobile phone business looks more interesting than it has in some time thanks to the Xperia 1.

Rather than specific new products, simple demonstrations of technology are what catches the eye.

Chinese firm ZTE used some space on their booth to set up a robotic band - comprising a pianist and a drummer - playing a range of music together throughout the show.

It shows that while much of robotics development focuses on improving industry and productivity, there is room for entertainment.