Michael O'Leary has committed himself to Ryanair for another five years, becoming CEO of a new group structure which will oversee the company's four airline subsidiaries.

The changes come as the airline reported its first fall in quarterly profits since 2014.

Ryanair said a 6% drop in fares resulted in a quarterly loss of €19.6m and Europe's biggest budget airline said overcapacity was likely to continue driving ticket prices lower, albeit at a slower pace.

Michael O'Leary had said in September at the company's AGM that he was not sure about committing to another five year contract.

Ryanair's weak third-quarter performance was flagged two weeks ago when Ryanair cut its profit forecast for the year ending March 2019 for the second time in three months.

Ryanair reiterated today it could not rule out a further downgrade, noting possible uncertainty from Brexit.

The firm said recent falls in oil prices would allow loss-making rivals to survive longer, maintaining excess capacity in Europe as others like Ryanair add more and more planes.

Michael O'Leary said he saw an eventual reduction in capacity, as well as consolidation in the sector, returning over 12-18 months.

Ryanair, which makes most of its profit in the summer, said fares were down 1% so far for April to September with just under a fifth of bookings in place.

It also pointed to a "flat to slightly down-ish" trend for the year ending March 2020 if short-haul overcapacity in Europe continues.

"We've seen commentary from some low cost competitors with very few bookings in place for summer 2019 promising enormous fare growth. Frankly we do not share the optimism and in some cases the irrational optimism. We think we should be cautious," Michael O'Leary said. 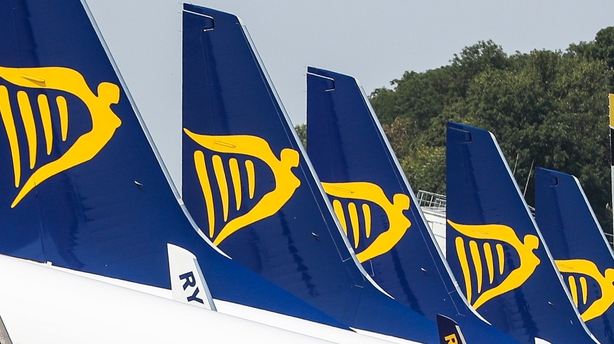 Ryanair's new group structure will be similar to that of Aer Lingus and British Airways-owner IAG, with four airline subsidiaries.

The main Ryanair carrier will be led out of Dublin and its Austrian and Polish airlines Laudamotion and Ryanair Sun, and Ryanair UK will each by led by their own CEOs and management teams.

Michael O'Leary will oversee cost efficiency, capital and aircraft allocation between the airlines in his new role, as well as potential small scale acquisitions - all on reduced basic pay and a lower bonus.

Meanwhile, Ryanair said its chairman David Bonderman, whose reappointment to a role he has held for more than 20 years was opposed by 30% of shareholders last year, planned to stay on until the summer of 2020.

He will then be replaced by Stan McCarthy, the former CEO of Irish food company Kerry Group.

"Stan will bring his enormous international experience (as a former CEO of Kerry Group) and leadership skills to the development of Ryanair Holdings over the coming years, although a legend like David Bonderman will be a very hard act to follow," Ryanair said.

The airline's director Kyran McLaughlin also said that he would not stand for re-election at the company's September 2020 AGM.

In its fiscal third quarter, Ryanair said an 8% rise in passenger numbers was offset by a 6% decline in average fares, while a 26% increase in ancillary revenues to €557m was offset by higher fuel and staff costs.

The quarterly loss of €19.6m, excluding €46.5m start-up losses at Laudamotion, compared with a €105.6m profit in the same period a year earlier.

In an October profit warning, the company had also blamed a summer of strikes and higher oil prices.

Pilot unions in some countries have suspended talks over pay conditions in protest at the threat of base closures and while Michael O'Leary said the airline had made "very good progress" in those talks, he could not rule out further base cuts if fares keep falling. 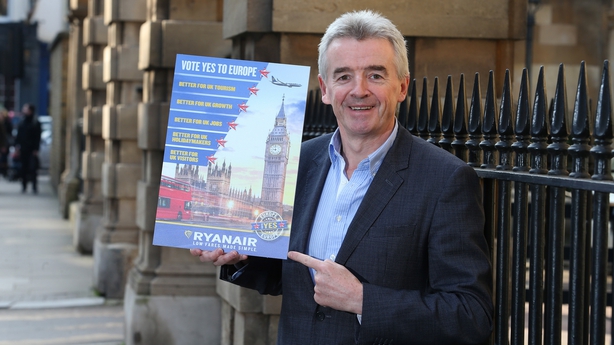 On Brexit, Michael O'Leary said that the risk of a no-deal  departure remains worryingly high.

"While we hope that common sense will prevail, and lead to either a delay in Brexit, or agreement on the 21 month transition deal currently on the table, we have taken all necessary steps to protect Ryanair's business in a no-deal environment," he said.

Ryanair said it has obtained a UK AOC to protect its three domestic UK routes.

"We will place restrictions on the voting rights and share sales of non-EU shareholders for a period of time (in the event of a hard Brexit) to ensure that Ryanair remains at all times an EU owned and EU controlled airline, even if the UK exits the EU without a deal," Mr O'Leary added.

Meanwhile, Ryanair said its passenger numbers rose by 7% in January to 10 million, up from 9.3 million the same month last year.