The update aims to give the brand a more modern and fresh image as the airline continues its expansion into the North Atlantic market.

The changes include a new version of the shamrock logo and new paint for the aircraft.

The website and app also carry the new look from today, as well as passenger check-in areas and boarding gates.

And there it is - the new @AerLingus livery. pic.twitter.com/zrYUtCXkXQ

New uniforms will be unveiled later in the year.

It is understood the cost of the rebrand came in below €2 million.

Over 50 shamrock designs were considered as part of the brand refresh process.

The shamrock has been given a tilt, which Aer Lingus says symbolises "dynamism and speed", while the heart shaped leaves have been made more pronounced, "reflecting the warmth and hospitality" of the brand.

The Aer Lingus font has been changed to "diodrum" with teal the main colour on the undercarriage, tail and engines and white on the body of the planes.

The company's 65 aircraft in the fleet will all be updated over time as they fall due for routine repainting every seven to eight years. 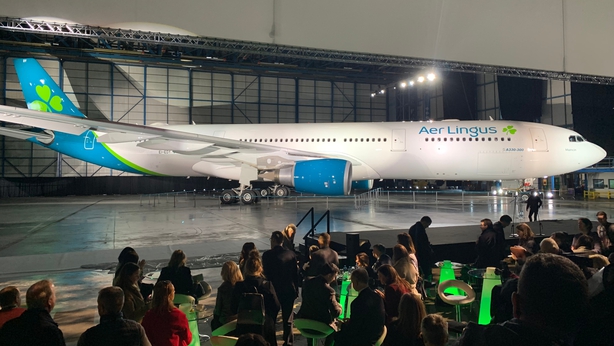 Four more new aircraft due to arrive this year will also come painted in the new colours.

Aer Lingus plans to increase its fleet to 80 over the coming years as it grows the North Atlantic fleet from 17 to 30 by 2023.

850 litres of paint are needed to cover a wide-bodied aircraft over 10 days, while a narrow body version requires 500 litres over seven to eight days.

The unveiling happened at Dublin airport today, where the airline showed off a newly painted A330-300 series aircraft in its maintenance hangar.

The first flight of the newly painted aircraft will be tomorrow, when it will travel to JFK airport in New York.

Recently appointed Aer Lingus Chief Executive Sean Doyle said the "refreshed brand reflects an airline that connects those living in Montreal to Marseilles; in Berlin to Boston; as well as those living in Cork to Croatia.

"The benefit for Ireland of being at the fulcrum of such connections is considerable and we in Aer Lingus are determined to realise this potential for Ireland," he added.

EY to create 800 jobs across Ireland