In a World Cup brimming with upsets, Nike looks on track to defeat soccer juggernaut and archrival Adidas in the closely watched jersey sponsorship battle.

The Nike swoosh decorates the outfits of Brazil, France and England, the sides in the quarter-finals most favoured by betting websites to win the World Cup, plus Croatia.

Top German sports brand Adidas has Belgium, Russia and Sweden in the quarter-finals, with the group of eight rounded out by Uruguay, sponsored by Puma.

The combined accomplishments of Nike-sponsored teams in Russia mark a major success for the US sports clothes maker as it pushes to increase global soccer-related sales that reached more than $2 billion in fiscal 2018.

Sports brands typically sell the bulk of their fan merchandise ahead of the World Cup, but a team's success on the field can generate extra demand for gear emblazoned with its emblems and colours, especially if its progress is unexpected.

Nike kitted out more teams than Adidas for the first time in Brazil in 2014.

Adidas fought back this year, sponsoring 12 of the 32 participating teams, including strong early contenders Germany and Spain, along with host Russia. 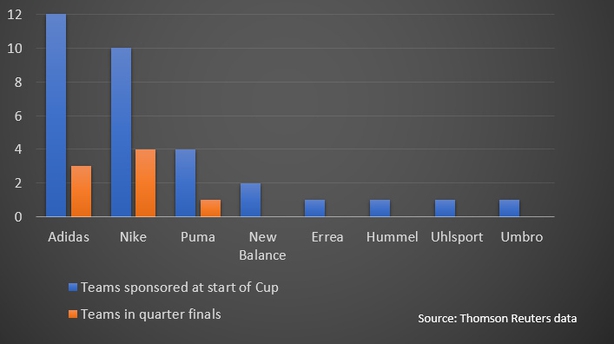 The tournament took a disastrous turn for Adidas last week, with the unexpected elimination of 2014 champion Germany. Shares of Adidas, Germany's team sponsor, fell 2.7% in the following session.

In 2014, Germany accounted for a third of Adidas' roughly 9 million team jersey sales, analysts noted, with an incremental 10% of those sales resulting from Germany's tournament victory. 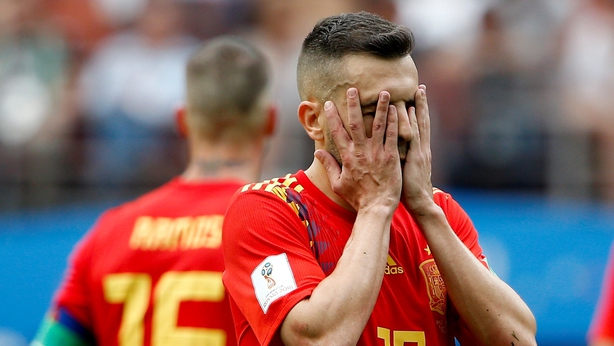 Over the weekend, high-profile Adidas-sponsored teams Argentina and Spain were eliminated. Likewise, Mexico lost to Nike-sponsored Brazil on Monday.

But the World Cup remains a major marketing opportunity for Adidas, which is one of seven FIFA partners and the supplier of the World Cup match ball since 1970.

As well as team jerseys, sponsorship of top individual players is critical for the promotion of soccer shoes.

Ahead of the World Cup, Nike expected 60% of players heading to Russia to use its footwear.

Since the start of the World Cup on June 14, Nike's stock is up almost 3%, helped mostly by a strong quarterly report and sales outlook last Thursday. Adidas has lost about 5%.