Ryanair has told pilot unions it cannot meet their representatives before Wednesday, the day when strikes are scheduled in Ireland and Portugal.

According to union sources, Wednesday's stoppage will not be called off without an initial meeting with Ryanair management taking place.

Sources said the pilots had written to Ryanair after the airline's unprecedented announcement this morning that it was prepared to recognise unions for the first time in its 32-year history in a bid to avert next Wednesday' strike.

In the letter, Impact said it was prepared to meet the company at any time.

However, it is understood that Ryanair management told Impact that it could not schedule a first engagement before Wednesday.

Pilot sources accused the airline of "playing chicken", and warned that the strikes will not be called off without an initial meeting taking place.

In a statement, Ryanair said Impact promised to call off the strike if Ryanair conceded recognition, adding "they've gotten our offer of recognition in writing."

The airline say "the sensible course of action" is for the meeting to take place next Wednesday and for the strike to be called off.

Ryanair had invited pilot unions in Ireland, the UK, Germany, Italy, Spain and Portugal to talks to recognise them as the representative body for pilots in Ryanair in each of these countries.

"Ryanair will now change its long standing policy of not recognising unions in order to avoid any threat of disruption to its customers and its flights from pilot unions during Christmas week," the statement said.

"Ryanair now calls on these pilot unions to call off the threatened industrial action on Wednesday December 20 so that our customers can look forward to travelling home for Christmas without the threat or worry of pilot strikes hanging over them," it added.

Italy's main pilots' union, Anpac, called off a four-hour strike planned for yesterday after the company said it would recognise the union in a bid to avoid the walkout.

An Anpac source said it had received a letter from Ryanair and that talks between the company and the union to establish a national contract would begin soon.

Fit-Cisl, a union that represents fewer pilots, said it would go ahead with the strike

A 24-hour stoppage by pilots in Ireland and Portugal is planned for 20 December, while pilots in Germany and Spain have said they are considering industrial action.

"We wish to remove any worry or concern that they may be disrupted by pilot industrial action next week," he stated. 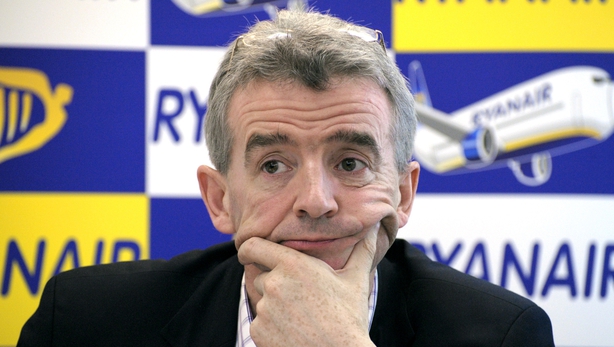 "If the best way to achieve this is to talk to our pilots through a recognised union process, then we are prepared to do so, and we have written today to these unions inviting them to talks to recognise them and calling on them to cancel the threatened industrial action planned for Christmas week," he added.

"Recognising unions will be a significant change for Ryanair, but we have delivered radical change before," Mr O'Leary said.

Ryanair pilots have mobilised in the wake of the announcement of 20,000 flight cancellations by Ryanair, which it blamed rostering issues.

The airline has brought back Peter Bellew, previously the CEO of Malaysia Airlines and Ryanair's former director of flight operations, to help deal with the roster issues.

He says this week is the right time to ensure all customers get home for Christmas and the airline has written to unions asking them to withdraw the threatened strike action.

He said that Ryanair would look at recognising cabin crew and baggage handler unions.

Mr Wilson also said there was no reason to think the airline's costs would increase as a result of this latest change in direction for Ryanair.

The General Secretary of the Irish Congress of Trade Unions has said Ryanair's letter to the unions is a significant piece of correspondence in terms of this particular dispute.

Speaking on RTÉ's News at One, Patricia King said the union have worked hard over the years in the face of company resistance and are are taking the sensible view that a meeting is now necessary to clarify issues and make progress.

"The parties here have never engaged before. I hope they have the conversation sooner rather than later," he said.

She also said there is no way you can predict whether or not it means strike action has been avoided.

"It would be very wrong to predict what may happen in those discussions," she added.

"We are looking into it," a spokesman said.

Ryanair shares closed down over 8% in Dublin trade yesterday.

The former director general of the Workplace Relations Commission Kieran Mulvey said there is nothing to stop Ryanair and IMPACT meeting over the weekend, following Ryanair's announcement this morning.

He said they could thrash out the circumstances under which formal negotiations would be engaged in and what the nature of the union recognition is and how it would be given effect.

Mr Mulvey said he was not sure if Wednesday's strike would be called off and suggested that the markets  could  ultimately determine that.

He advised both sides should go off to a private location to thrash it out over the next few days.

He said there is an opportunity here to construct something very positive if the spirit of what Ryanair said is true and they want to bring it to reality,  and the union has to deal with its past non-relationship with Ryanair.