Strong initial demand for the S8 will be encouraging for a firm recovering from one of the worst product safety failures in tech history, which ended in the Note 7's swift withdrawal.

The new smartphone has received favourable reviews ahead of the start of sales in South Korea, the United States and Canada on 21 April.

The first shipments here in Ireland will be on April 28th.

Some investors and analysts have even predicted a first-year sales record for the South Korean company.

"It's still a bit early, but initial response to the pre-orders that have begun at various places across the world have been better than expected," mobile chief Koh Dong-jin said at an S8 media briefing.

He said the S8 will be the safest Galaxy smartphone to date due to measures implemented to avoid the battery failures that caused some Note 7s to spontaneously combust.

Analysts said strong S8 sales are likely to help Samsung to its best-ever quarterly profit in April-June, along with a booming memory chip market that is widely expected to deliver record revenue this year for the industry as a whole.

Samsung has been working to restore investor trust as well as its reputation since the Note 7's withdrawal in October within two months of being on the market, losing out on $5.4 billion in profit. 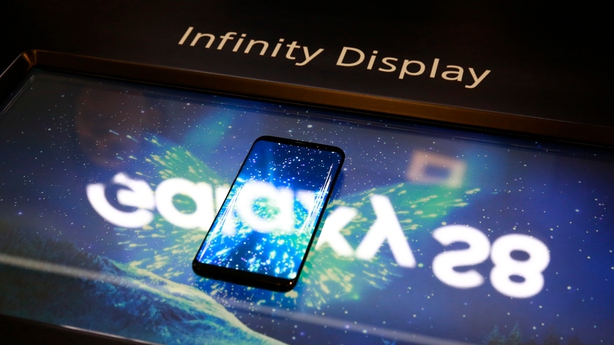 Senior executives told foreign media on the sidelines of the briefing that it will take time for Samsung's brand image to recover.

They also said Samsung has seen a rebound in consumer sentiment towards the firm since announcing the results of a probe into the fires and preventative measures on 23 January.

"It took Toyota about four years for its brand to get back to where it was, and I think ours can do it faster," said Lee Young-hee, an executive vice president at Samsung's mobile business, referring to a series of Toyota vehicle recalls from 2009 to 2011.

S8 advertising focuses on features such as almost bezel-less screens rather than highlighting safety.

Executives said this was deliberate in the belief that Samsung has done enough to convince consumers the Note 7's problems will not be repeated.

"We felt really comfortable that we had attained a level of confidence with consumers so that we could actually shift to the product campaign," said Pio Schunker, global head of integrated marketing for Samsung's mobile business.

"Ultimately I think it is this product that proves this case."

Meanwhile, the company's UK and Ireland mobile boss has said the Note 7 debacle was a big moment for the industry.

Conor Pierce said the crisis surrounding the product would "never leave" Samsung and has led to zero tolerance and paranoia around the issue of quality.

Mr Pierce, who was personally involved in swapping Note 7s for Galaxy S7s at Heathrow airport in London as users boarded planes, told RTE News that it had been a humbling experience for the mobile giant.

He also said that Samsung plans to launch its mobile payment system in the UK this summer, with Ireland following along shortly behind.

Google's Android Pay and Apple's Apple Pay have both launched in the Irish market, leaving Samsung trailing in their wake.

Mr Pierce said technically the company is ready to launch the service here, but doesn't want it to be a "me too" offering alongside competitors.

"We're aiming for a certain coverage level," he said. "We want to make sure we work with local partners."

The former Nokia executive said Samsung also plans to up its retail presence here this year in order to enable it to demonstrate its virtual reality headset.

Mr Pierce predicted that the next big things in the mobile market would be artificial intelligence and the connected home.