Independent News and Media has declined to comment on reports that the company's CEO Robert Pitt made a disclosure to the Office of the Director of Corporate Enforcement.

Earlier, INM confirmed it was complying with a requirement from the ODCE to produce records in relation to the possible acquisition of radio station Newstalk.

The Irish Independent has reported that the disclosure made under whistleblower legislation prompted the ODCE to seek information from INM.

The company said in a statement, accompanying its financial results, that the requirement from the ODCE to produce records is "a procedural matter and does not involve any conclusion that there has been a breach of law by the company or its officers".

Last November INM issued a stock exchange statement confirming that an "issue" had arisen between its chief executive Robert Pitt and chairman Leslie Buckley in relation to terms of possible acquisition by the company.

Reports had suggested that Mr Pitt wanted to offer a lower price for Newstalk, which is the biggest competitor to RTÉ in the commercial radio sector, than a valuation obtained by Communicorp.

Mr Pitt had received a separate and significantly lower valuation on what the asset was worth.

Today, INM said before it was contacted by the ODCE it had established formal independent review to examine and inquire into matters concerning the possible acquisition of Newstalk and related matters.

It said: "The confidential, independent review is being carried out on behalf of the board by senior counsel and a senior independent governance expert who have been mandated to report to the board."

Separately the owner of the Irish Independent and Sunday World today reported a 11.8% rise in pre-tax profit to €41.8m for the year to the end of December.

Revenue for the year rose by 0.7% to €323.4m despite a fall in both circulation and print advertising.

The company said that total advertising revenue fell  by 4.7% in 2016, driven by a 9.2% drop in publishing ad revenue. INM also noted that its circulation revenue fell by 5.2%.

However, digital revenues continued to grow during the year, rising by 20.4%, on the back of combined growth in advertising, classified and the deal for CarsIreland.ie.

INM improved its bottom line by cutting costs, including closing its printing operation in Belfast during the year and the winding up of its GrabOne business.

During the year it also completed the acquisitions of both the remaining 50% shareholding in CarsIreland.ie and Greer Publications. 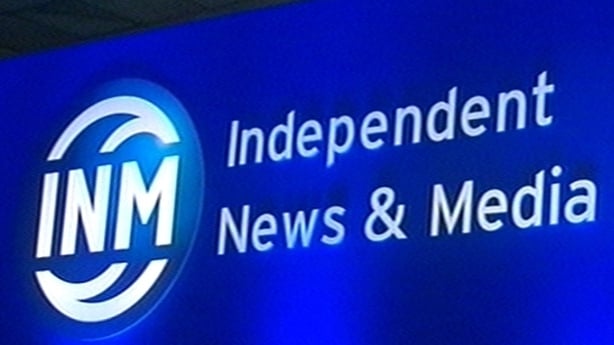 Mr Pitt also said the industry is challenged by uncertainty relating to Brexit and other international results.

He also said the group is in ongoing talks with the trustees of its two pension schemes and is intent on achieving a "satisfactory" outcome for all concerned, including pension members, employees and shareholders.

Shares in the company closed over 9% higher in Dublin trade today.