Amid fanfare and celebrity razzmatazz, sales on Alibaba's platforms had raced to a billion dollars in less than five minutes and broke past last year's total with almost nine hours of the day-long shopping gala to spare.

The final total marked a 32% rise from 2015, but growth was significantly lower than the 60% increase last year, a reflection of more caution among shoppers who opted to spend less money on each purchase than in previous years.

The 24-hour event, held annually on 11 November, offers a benchmark for Alibaba's performance and an insight into China's swing to online shopping, especially via smartphones.

Alibaba Chairman Jack Ma played down the importance of the final figure in a speech shortly before midnight, echoing other executives who spoke during the day.

"(Singles' Day) is not about a number only," said Ma, adding that the gross merchandise value (GMV) metric was "misleading" because it undervalued the company's wider ecosystem.

GMV refers to the value of goods sold by vendors through Alibaba's platforms. Alibaba makes money through advertising and charging vendors a proportion of their sales.

"When volumes started to grow a little less fast I actually became more relaxed," said Ma, citing the challenge of handling such a large number of orders. "We don't want to collapse the entire logistics system."

After a beefed-up marketing push over the last month – with fashion shows and virtual reality games - sales officially opened at midnight, releasing a wave of pre-orders that shoppers had placed ahead of the event. Sports stars David Beckham and Kobe Bryant attended the countdown, though headline act Katy Perry pulled out last minute citing a family issue.

At mid-afternoon a live sales tracker at an Alibaba event in the southern Chinese city of Shenzhen ticked passed the 2015 yuan total, ensuring the day set a record.

The rise of Singles' Day reflects how China's consumers, armed with smartphones, are racing online to shop - to the detriment of bricks and mortar stores. Around 82% of total sales were via mobile devices, up strongly from last year.

The day itself is a double-edged sword for many: Couriers and packaging firms say low prices and steep competition mean profit margins are slim despite large sales volumes. 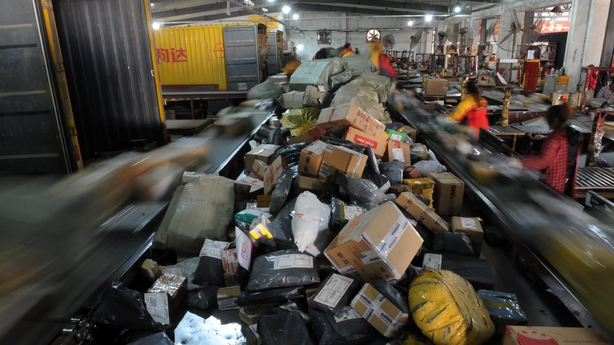 Retailers are also starting to feel the pinch: The cost per order shrank to 184 yuan ($27) from approximately 194 yuan in 2015, according to the unaudited metrics released by Alibaba.

In May this year, Alibaba said the US Securities and Exchange Commission was looking into how it reports its Singles' Day figures. Alibaba said at the time it was cooperating with the authorities, and that the SEC advised it the investigation should not be seen as an indication the company had violated federal securities laws.

Alibaba declined to comment on the SEC probe today.

The company has also faced criticism for its failure to address selling of counterfeit goods on its online marketplace. During his speech Jack Ma called on authorities to confiscate licences from manufacturers making counterfeit products.

"Someone has to remove their licences, someone has to close them down," said Ma, adding that Alibaba itself was "not law enforcement".

Alibaba is not the only retailer to mark 11 November with a massive sales drive. China's number two e-commerce player, JD.com, and many others also offer discount deals on the day.