In the same week it was announced that the total UK ad market grew by 7.5% in 2015 - the fastest rate since 2010 - the UK press reported an 11% fall in advertising revenue, writes Aidan McCullen.

In late 2015 American think tank the Brookings Institution reported that the number of newspapers-per-million population fell from 1800 to 400 today.

So it seems like analog dollars are being exchanged for digital dimes, but that is not the case.

Last March (2015) GigaOM, another seemingly thriving digital publisher, which had a mix of subscription, conferences and advertising ran out of runway and collapsed.

Further blows to investors in Buzzfeed, which include NBC Universal, are that the decline is not just in revenue, but also in audience.

So what is going on and what does the future hold for publishers?

To understand the current situation one needs to zoom out and look back over the last ten years.

When the recession hit and advertising revenues were impacted, so too were marketing spends.

Your spend used to go to a marketing mix of TV, Radio, Press, Creative and Email Marketing and you were dabbling in a “newish” thing called search engine marketing,

Back then (and maybe still now) you didn’t know what you were doing so you ticked the box and took a few screenshots for your board meeting marketing PowerPoint to show you were on top of digital.

Then the recession hits and your ad spend is halved to €200k, but in tandem with this comes the growth of the new kids on the block SEM, SEO, display advertising and social media.

Now you have less spend and now you have no more or less people and have to manage a Twitter, Facebook (and maybe Bebo - RIP) and a few others that you read about.

Your workload, which used to be focused around three or four media and PR has now increased and your marketing mix has fragmented even further and there are more plates spinning on sticks than you can manage. 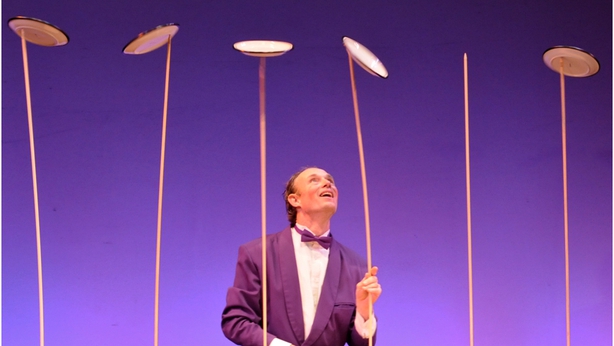 Along come a few knights in shining armour, new propositions, a social media agency and a search agency and a digital advertising agency, maybe even an agency who offers all these services.

You outsource all these new skills to the agencies, which simply learn on the job as you would have done, had you the time, capacity and perhaps desire.

As you do this, you outsource an extremely important part of your future – digital media marketing.

So a perfect storm is brewing. 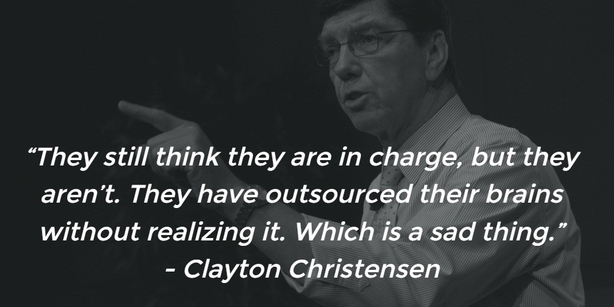 Google is all about the data, as organising the world’s information is at the heart of their mission.

Google gradually roll out a slew of increasingly free tools and services that track everything as users are increasingly incentivised to stay logged in across Gmail, YouTube and Gmail sign-in to other sites.

Facebook soon realises that they should up their data offering and gradually introduce tweaks to their algorithm; content is tailored to a user’s interaction with it, with certain users and brands and whether or not you engage with content by liking, commenting or sharing it.

Facebook audience grows quarter on quarter, revenue soars, after a wobbly IPO, investors who stuck are repaid handsomely if they cashed in.

Meanwhile the virtual reality move with the Oculus acquisition invokes the quote by the hockey legend Wayne Gretsky when asked how he played so well: “I skate to where the puck is going to be, not where it has been.”

The publishers: traditional and digital

In tandem with the constant evolution of the advertising and marketing eco-system, we witnessed the bankruptcy of agencies, publications and media alike.

Publishers were slow (some still are) to implement the changes required to adapt to the new world.

Many media are and were unable to both operate their existing business whilst simultaneously reinventing themselves.

Like the marketer mentioned above, who performed tick-the-box digital activities, many publishers sent a select few of their sales force on day-long training courses expecting them to ”learn digital” overnight.

Many young digital upstarts who instinctively know what to do are consistently frustrated, try many initiatives, may have some odd wins, but the frustration eventually leads them to leave and join the tech giants or pre-IPO start ups.

They join companies who are set up to deal with the ecosystem as it is today not yesterday.

Some publications undervalue digital inventory and start to bundle digital at little or no cost to close the deal on traditional deals, despite the protestations of the digital upstart who is about to leave due to frustration.

Some publishers even destroy their social media with mixed messages to their audience pushing sales messages on behalf of advertisers, sometimes at no cost.

On the operations side of the house, it is incomprehensible to some, how some young upstart who knows a lot about this could rise up the ranks quickly and begrudgery and grumbling is widespread.

Mediocrity creeps in as managers who fear change and competency hire weaker people who are not a threat to them and won’t expose their own incompetence.

Another strand of publisher is born amidst the traditional publishers meanderings.

The digital-only player, the model here is a mix of aggregation and snackable distribution.

By ”aggregating” others’ content, I mean reading a piece by another journalist or blogger or listening to a well researched piece of radio and transcribing it better than the traditional publisher where the story originated can do.

The original reporter and source of the story is usually not skilled at social and digital distribution as that skillset is at that time a rare skill and the traditional publisher has neither the foresight nor the capital to invest in a whole new division – not until it is rather late in the day that is.

In Greek mythology, Charon (Kharon) is the ferryman of Hades who carries souls of the newly deceased across the rivers Styx and Acheron.

A coin to pay Charon for passage was sometimes placed in or on the mouth of the dead.

Many publishers saw Facebook as an easy way to grow their traffic, publishing links to Facebook and Twitter and other networks, which would drive traffic back to their sites.

These publishers thought they nailed it, some saw 80% of traffic come from social.

Meanwhile Facebook came under increasing pressure to monetise their audience.

Zuckerberg resisted as long as possible as he knew Facebook was still in the accumulation stage.

Eventually Facebook flicked the switch and the money machine began, if you recall it was only on desktop to begin with as mobile needed to be treated very carefully for two reasons.

The screen size and user experience needed to be maintained and there was a huge shift to mobile coming, with circa 80% of the world’s traffic is now via mobile devices.

Many publishers denounced Facebook saying that the y changed the rules to suit their monetisation requirements.

Well, yeah of course they did, they were quietly building an ecosystem and learning from everyone else’s data and they became a gateway to the internet, much like Google is for many people.

In defence of Facebook, think of it this way:

- there is more content being created in the world than ever before.

- everyone has a smartphone and can create images, video, audio, memes with ease.

- brands are now publishers as well as bloggers and of course publishers.

- the audience has become less tolerant of irrelevant content.

- the Facebook feed is tight real estate and content needs to be relevant (remember those reactions buttons). 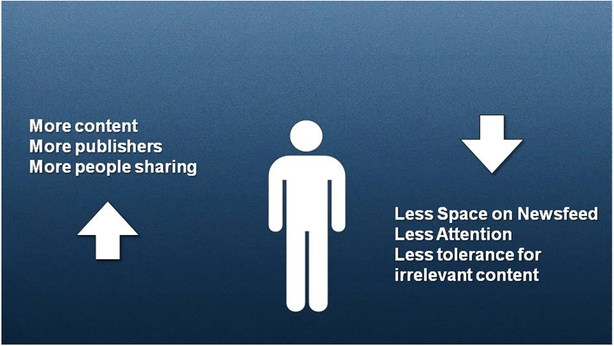 So, monetisation apart, Facebook needed to protect the platform, it just so happened that if you wanted to reach the fans you built up through competitions, like gating, fan gating, engagement and sharing links you now had to pay to do so.

You now have to pay Charon, the ferryman to use the targeting capabilities and to reach the audience on this platform.

In Part 2 we will explore what can be done when the world’s publishers and brands are operating in this ecosystem.

We will explore how to be ‘best frenemies’ with social media.

Subscribe to the RTÉ Innovation Show here for an upcoming exclusive interview with two leaders in social media: CEO of Newswhip Paul Quigley and Jeff Bullas of Jeffbullas.com and author of the Amazon bestseller - "Blogging the Smart Way - How to Create and Market a Killer Blog with Social Media".

This will explore ways publishers can navigate the current ecosystem.