US Federal Reserve Chair Janet Yellen has expressed confidence in US economic growth, but said the Fed would stick to a "gradual" pace of interest rate increases as headwinds from slower global growth and the oil price crash diminish.

In her first public remarks since the Federal Reserve took a surprisingly dovish stance on monetary policy in its March meeting, Yellen reaffirmed an optimistic outlook for the US economy.

But she told the Economic Club of New York that the Fed has to move cautiously even as it expects to slowly tighten monetary policy over the next few years following its December rate hike.

Broadly speaking, she said the Fed is holding to its forecasts for moderate US growth and inflation heading to the Fed's 2% goal over the medium term.

But, despite recent comments by some Fed officials that inflation was already speeding up and suggesting the Fed could raise interest rates again over the next few months, Yellen suggested she was still not convinced.

"It is too early to tell if this recent faster pace will prove durable," she said.

At the same time, Yellen said the Fed still has to keep an eye on the global slowdown and markets turmoil as it decides policy.

She pointed specifically to uncertainty about China and how its troubles and its broader economic transition affects global growth.

"There is much uncertainty, however, about how smoothly this transition will proceed, and about the policy framework in place to manage any financial disruptions that might accompany it," she said of China.

She also said that the sustained collapse of the market for oil and other key commodities is also keeping a cloud over the global economy, even as cheaper prices benefit consumers and manufacturers.

Another sharp fall in oil prices would have an adverse impact on the world economy, she noted.

Markets took her remarks as indicating the Fed would not be ready to raise its benchmark federal funds rate again before June, and maybe later than that. 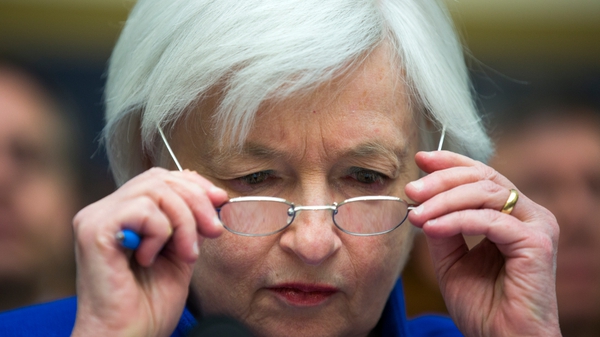