This throws into doubt what was set to be the biggest takeover by a foreign firm in Japan's technology sector.

Loss-making Sharp announced earlier in the day that it had agreed to be bought by Foxconn, a contract manufacturing firm that is a major Apple supplier.

But, in a separate statement issued hours later, Foxconn said it would not sign until it had clarified terms in "new material information" from Sharp. It did not elaborate.

Two sources with direct knowledge of the matter said the Japanese group had contingent liabilities that amounted to "hundreds of billions of yen".

That issue would have to be resolved before a deal could be finalised, said the sources, who spoke on condition of anonymity as the talks were confidential.

The sources did not elaborate on the nature of the liabilities or the exact amount.

The 11th hour delay jeopardises a deal that would have marked the conclusion to five years of courting by Foxconn founder and billionaire Terry Gou and the opening up of Japan's insular tech sector to foreign investment.

The loss-making display maker said earlier in the day that it would issue around $4.4 billion worth of new shares to give Foxconn a two-thirds stake. 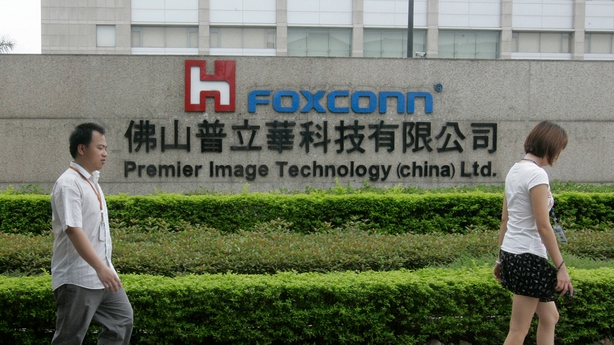 Foxconn's investment is set to total more than 650 billion yen ($5.8 billion), a separate source familiar with the matter said.

If a deal does go through, it would boost Foxconn's position as Apple's main contract manufacturer and enable Sharp to start mass-producing organic light-emitting diode (OLED) screens by 2018, around the time Apple is expected to adopt the next-generation displays for its iPhones.

Foxconn sees ownership of Sharp as a way to better compete with Asian rivals such as Samsung Electronics.

Before Foxconn's late statement, Sharp's stock tumbled to end 14% lower as the share dilution looked larger than expected, with traders noting the proposed deal included the issuance of a class of shares that would be convertible next year.

Sharp's board voted unanimously to accept the Foxconn offer over a rescue by a state-backed investment fund, its chief executive Kozo Takahashi told reporters.

Sharp said it aimed to become a global supplier of OLED screens, which are thinner, lighter and more flexible than current displays. South Korea's Samsung Display and LG Display are also investing heavily in the new technology.

The century-old Japanese firm was once a highly profitable manufacturer of premium TVs and a favoured screen supplier to Apple.

But it has struggled in recent years as massive investments in advanced liquid crystal display plants failed to pay off amid price competition with Asian rivals, and two bank bailouts since 2012 did little to help turn its business around.

The late hitch revived memories of a breakdown in 2012 of an agreement between the two companies to form capital ties.

Lingering distrust over the previous collapsed deal was one reason for the government and Sharp officials initially supporting a rescue plan by state-backed Innovation Network Corp of Japan (INCJ).

INCJ's plan was seen as a way to prevent the company's technological expertise from being transferred to a foreign company. The fund had planned to merge Sharp's screen business with Japan Display, in which the fund owns a majority stake.

INCJ's plan looked set to succeed, but policymakers warmed to Foxconn's offer as a step towards bolstering foreign direct investment in Japan.