Yahoo said it would consider "strategic alternatives" for its core Internet business and cut about 15% of its workforce, as it continues with a plan to revamp the business and spin it off.

The announcement is the strongest sign yet that the board and CEO Marissa Mayer may be willing to sell the struggling Internet business, essentially websites, email and online search.

The moves comes amid growing pressure from impatient shareholders.

In an interview with Reuters, Ms Mayer said the company will entertain offers as they come but its first priority is the turnaround plan.

If it receives an offer this year, it was unlikely that the transaction would be completed before the nine to 12-month timeline projected for the spin-off, she said.

"We would obviously engage but I think the one thing we're trying to do is set our shareholders' expectations in terms of complexity," Ms Mayer said.

The planned restructuring announced last night includes the closure of offices in five locations, a paring down of its products, shifting more resources to mobile search, and the sale of some non-strategic assets such as property and patents.

But its Dublin-based headquarters for Europe, the Middle East and Africa, where more than 300 people are employed, will remain open.

The web pioneer's revenue peaked in 2008 and while it still runs some of the world's most-read websites, it has been unable to keep up with Alphabet's Google and Facebook in the battle for online advertisers.

In the rejig of its business, it will focus on three main consumer platforms, Search, Mail and Tumblr, and four "digital content strongholds" in the form of News, Sports, Finance and Lifestyle.

The changes are designed to increase mobile, video, native and social advertising revenue 8% to $1.8 billion and cut operating costs by $400m this year. It is also aiming to generate $1 billion to $3 billion in asset sales.

Mayer dismissed accusations of excessive spending, saying a report of a $7m bill for Yahoo's Christmas party was exaggerated by a factor of three. 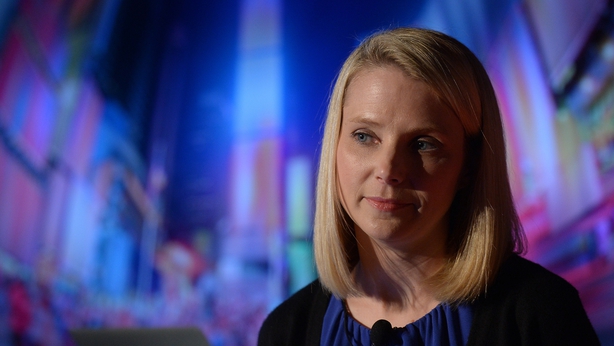 Yahoo's adjusted quarterly revenue tumbled 15% to $1 billion after deducting fees paid to partner websites, as it struggles to keep its share of online search and display advertising.

Mayer proposed in December that Yahoo spin off its main business after it abandoned efforts to sell its Alibaba stake.

The company reported a loss of $4.43 billion, or $4.70 per share, in the quarter, due to a large write-down to account for the lower value of some units. That compared with net income of $166.3m, or 17 cents per share, a year earlier.

Among the write-downs, the company took an impairment charge of $230m for Tumblr, the social blogging site for which it paid $1.1 billion in 2013.