As a proposition, Google’s Chromecast device is a simple and effective one.

You have video or audio content on your smartphone or tablet and you want to play it back on your TV.

You plug the device into your TV, set it up and “Hey Presto” - YouTube, Netflix or a host of other streaming apps on your telly box.

As a result of its effectiveness, and its price (€39), it sold like hotcakes – 17 million at last count.

And now there’s a new version.

The first thing that’s noticeably different is how the new Chromecast looks.

The old USB stick style shape has given way to a round device with a flexible HDMI plug emerging from it – a good thing if the HDMI ports on your TV are situated close together.

There’s even an embedded magnet in the two pieces, so that the plug sticks to the main part of the device for the sake of tidiness.

And it comes in three colours.

A separate power supply is still required for the Micro USB port on the Chromecast, which can come either from the TV’s USB port or from the power adapter and cable which is also included.

Inside, the Chromecast has some updated networking and antenna technology which the people at Google say increases the video resolution and decreases buffering.

Then it is simply a case of downloading the newly updated Chromecast app (Android and iOS), plugging everything in and following the Wifi connection setup on-screen instructions.

This is relatively straight forward, though I did experience a small amount of difficulty the first time, which I was able to quickly resolve.

The new device also has a Fast Play feature, which means streaming starts in the background as you browse, reducing buffering to a minimum.

The new app makes it easier to find Chromecast compatible apps, of which there are many.

It works as well as it should, and at a similar price to the original, the new Chromecast will continue to each the lunch of the wide range of (generally more expensive) rivals. 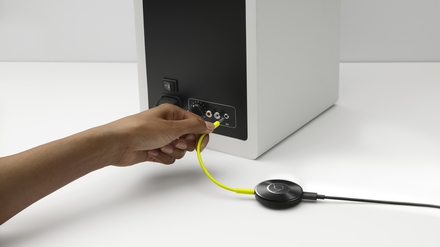 Because the new Chromecast, like the old one, works so well, it may seem curious that Google decided to bring out an audio variant.

But the company saw an opening for an audio only streaming device, to turn the old hi-fis and speaker systems we all have scattered around our homes into something useful.

It also looks broadly similar to the video version, minus the protruding HDMI cable.

The big difference is that it has a 3.5mm cable socket on its side, which is used to connect the device to the AUX or line-in on the speaker, amplifier or hi-fi unit via the cable provided (RCA and optical inputs are also supported, but the cables for these are not provided).

It operates through the same app as the Chromecast, and set up is much the same process – though I did find it a less straightforward.

It did take more than one attempt, and an unpairing, before I got the device working properly.

But once it is, you can immediately see the attraction.

That old black little-used lump of nineties and early noughties technology which you spent a large amount of cash on at the time, but barely use now, is suddenly rendered useful again.

That is if the apps you use are supported.

So far, the list includes bigger names like Google Play Music, Deezer, Spotify and TuneIn Radio and many.

It is not, however, as long as the list of apps available for Chromecast quite yet.

YouTube does not support Chromecast Audio, which is surprising given the amount of music available on the popular video app.

Apple Music and Amazon Music are also not on the list.

Also, I noticed that on Spotify that Chromecast was only available to those paying a subscription, which is a little annoying.

Multi-room support is promised, to allow you run the same music across multiple speaker systems in different rooms at the same time – great for house parties!

You can also cast from the Chrome browser, using a Chromecast plug-in.

Sound quality is pretty good, and there is a limited level of high-re audio compatibility.

So if you want to resurrect that old ghetto-blaster or make use of that wedding gift set of high end speaker, Chromecast Audio is an effective and cheap option - considerably cheaper than the other