Business group Ibec welcomed measures in the Budget which are aimed at improving the long-term sustainability of the economy after a significant increase in capital spending of €1.5bn and the elimination of the Budget deficit.

"It is vital now that both the capital plan and Brexit mitigation supports are implemented without haste. Nevertheless, competitiveness pressures will be increased for some sectors as a result of changes made today with much of €700m in tax increases falling on business," Mr McCoy said.

He also said that after a decade of running Budget deficits, Ibec was happy to see a return to surplus and a balancing of the books.

***
Ian Talbot, chief executive of Chambers Ireland, said that Budget 2019 does nothing in the short term to enhance the country's competitiveness at this crucial time in the run-up to Brexit.

No changes to the CGT regime in particular was a surprise, and Ian Talbot said Chambers had asked the Government to increase the earned-income tax credit by €500, but only a €200 increase was delivered.

He also said that he was extremely disappointed with the decision to increase the 9% VAT rate for the hospitality sector and this will come as a blow to regional Ireland.

"We now hope that the effects of this on rural jobs might be offset by increased funding going towards tourism bodies, by expanding our market reach and delivering capital investment," he added.

David McNamara said the considered tone is no surprise with Brexit looming.

"However, the focus on investing in our future, and the commitment from the Minister to "prioritise" the National Development Plan is vital. Ireland’s greatest natural resource is our skilled workforce, and the plan to ramp up investment in our third level sector and R&D is vital to maintain our international competitiveness and plug the emerging skills gap," he said.

The Irish Exporters Association has cautiously welcomed today's Budget, saying it was good to see the attention given to Brexit preparedness measures and future proofing the Irish economy by investing in education and SMEs.

But Simon McKeever, chief executive of the Irish Exporters Association, said it was concerned that the Government seems to be preparing support for Brexit based on the assumption that a deal will be done between the EU and the UK and has not factored in the potential for a no-deal crash-out by the UK.

"The risk of the latter remains high and the impact to the Irish economy severe," he added.

Peter Vale, Tax Partner at Grant Thornton Ireland, said there were no major surprises in today's Budget, with most of the key measures well flagged in advance.

Consistent with recent Budgets, Peter Vale said the main beneficiaries were low and middle income earners, although gains were very modest. A single individual earning €45,000 will be €4 a week better off next year.

But savings on the income tax front are likely to be absorbed by so called "stealth taxes" elsewhere, he added.

ISME has this evening welcomed the increased capital spending in today’s Budget, which it said will benefit indigenous business.

However, it has noted that those aspects of the Budget directly related to SMEs lack specifics.

ISME's CEO Neil McDonnell said that on taxation, the gap between self-employed and PAYE workers was meant to close last year. Yet this year we have only gone two fifths of the way.

"The cost of full equity between self-employed and PAYE workers would have been just €37m. But this has been ignored in favour of increased spending in the public sector," he added.

Accounting firm Deloitte said the increase in the tourism VAT rate would mainly impact hotels, other short-term guest accommodation providers and restaurants, but will also apply to other areas including cinemas, theatres, hairdressers, museums and art galleries.

"Critically the increase in the VAT rate will not have any impact on the already high rents being charged in the residential letting market as, in contrast to holiday type accommodation, that accommodation is exempt from VAT," John Stewart, Tax Director at Deloitte said.

"The 9% rate was introduced initially for a three year period following a deep recession and has cost the exchequer an estimated €490m in 2017 and €2.6 billion in lost VAT revenue since its introduction," he added. 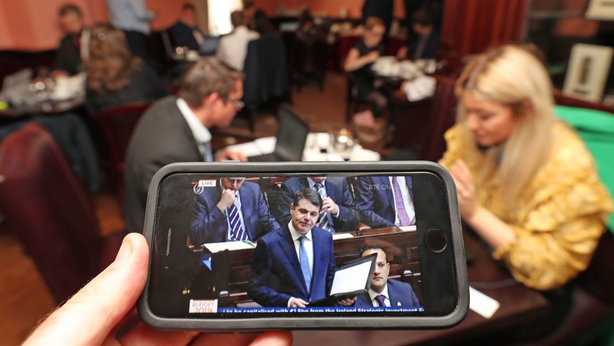 Hays Ireland Managing Director Mike McDonagh has said that Budget 2019 did not go far enough to make an impact on the tax burden on middle income earners.

"We recognise the Government’s move to reduce third rate USC by 0.25% and the increase in the middle tax bracket threshold to €35,300," Mr McDonagh said,

"But what will ultimately result in an extra €5 per week to the average employer, will not help close the mounting gap between escalating wages in certain sectors against the stagnant lower offering in others - still leaving everyone in the middle to carry the burden," he added.

Alison McHugh, Tax Director at Deloitte, said that while the changes in the income tax bands and credits will see most families with some increase in their net monthly income, there is still a significant gap to where we were before the financial crisis.

"In 2019 that same couple’s net monthly take home pay (including children’s allowance which is now down to €280) is €5,017. Coupled with the increase in cost of living together with other taxes such as increased VAT and the introduction of local property tax, this family has seen a significant drop in their disposable income," she added.

Savills Ireland said that Budget 2019 contained fewer property measures than had been anticipated, but added that the less-is-more approach was "prudent and appropriate".

Dr John McCartney, Director of Research at Savills, said that various proposals that had been floated before the Budget, for example a State-sponsored First Time Buyer savings scheme, would only have fuelled house price inflation.

"With housing inflation now moderating on its own, the Government did well to resist such measures," he said. McCartney also welcomed the fact that, contrary to pre-Budget rumours, stamp duty on sales of apartment blocks was left unchanged.

"Rumours over the last few weeks of increases here would certainly have led to slowdown in the delivery of these vital projects and would inevitably have increased end users costs of occupation. I have little doubt that projects will advance in 2019 now that this uncertainty is resolved," he added.

The Construction Industry Federation said it was disappointed that there was no clarity in relation to an extension of the Help to Buy scheme which is due to expire in December 2019.

CIF Director General Tom Parlon said this will create uncertainty next year for both first-time house buyers and homebuilders.

"The Help to Buy Scheme has significantly contributed to a 30% year on year increase in housing output since its introduction. This measure essentially resulted in making it financially viable to build starter homes again and freed up finance from banks for this segment".

The CIF also said it was essential that the Housebuilding Finance Ireland fund announced last year is deployed.

"We're calling on the political system to accelerate the introduction of this measure. This will ensure that regional housebuilders have the financial capability to deliver homes outside the greater Dublin area where there is viable demand," Mr Parlon said.

Marian Finnegan, Chief Economist at Sherry FitzGerald and Cushman & Wakefield, said the Budget measures in relation to the private rental sector are disappointing.

"Thousands of private investors are leaving the market each year due to  increased costs and regulation. The initiatives announced today will only improve net yields by approximately 50 basis points, and as such are unlikely to have any significant impact on the available stock of rental property," she added. 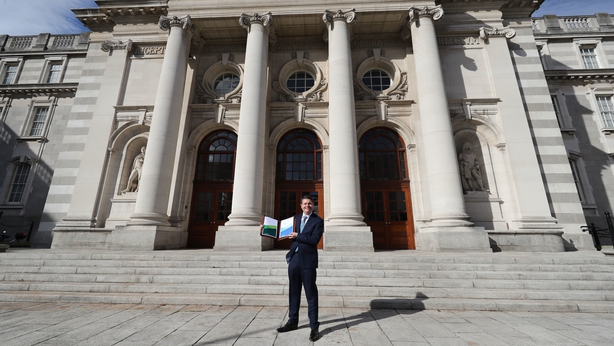 But he pointed out that it remains 41% below the threshold of €542,544 which applied in 2009. "The overall effect has been to increase the real burden of inheritance tax on the family home given the significant increase in house prices during that period."

Commenting on the Budget decision to increase VRT on the registration of diesel cars, SIMI Director General Alan Nolan said the "poorly considered measure"appears to have been included to give the perception of an environmental focus in the Budget.

He noted that city-based car buyers have already moved away from buying new diesel cars, with the Dublin diesel share having reduced from 70% in 2014 to 51% this year.

"The bigger impact here will be on rural and business buyers for whom diesel is still the better environmental choice," he said.

"The real problem is that this type of provision is likely to have a different impact to what is intended, for instance it may cause some purchasers to postpone their car change, reducing the potential to add cleaner new cars into the fleet," he added.

Breen Cassidy, Tax Partner, EY Ireland, said the 1% increase in VRT on new diesel cars across all tax bands introduced in the Budget today is going to increase the costs of motoring in Ireland and likely to bring into sharper focus the significant increased number of imported cars from the UK.

He also said the introduction of a new fuel economy system across Europe called Worldwide Harmonised Light Vehicles Test was highlighted by the Minister for Finance as likely leading to further increased VRT costs for motorists.

Peter Vale, Tax Partner at Grant Thornton Ireland, said the big surprise in the Budget from a corporate tax perspective was the introduction of a low 12.5% "exit tax" (down from 33%) for companies that migrate residence or transfer assets offshore.

"While the reduction in the tax rate was not unexpected, the introduction from midnight of new tighter rules that impose the exit tax in line with more stringent EU rules was not anticipated," he said.

"Under EU rules, Ireland was obliged to tighten its exit tax rules, but not before 1 January 2020. The early adoption of the new rules is a surprise. While the Minister announced that the new rules were brought forward to provide certainty to businesses, the surprise element is never welcome," he added.

Kevin McLoughlin, Partner & Head of Tax at EY Ireland, said the well flagged introduction of controlled foreign corporation rules in line with Ireland's requirement to transpose such ATAD rules within national law was confirmed in the Minister's speech.

He said the Minister also referred to the introduction of an ATAD compliant exit tax of 12.5%, applicable from midnight tonight on any unrealised gains where a company migrates or transfers assets (including IP assets) offshore out of the Irish tax net.

"Whilst the corporation tax roadmap signalled introduction to an ATAD exit tax no later than 1 January 2020, the early adoption of the measures effective from midnight tonight has come earlier than expected. Further detail with respect to the measures should be disclosed within the financial resolution," he added.

Children's charity Barnados said that Budget 2019 has shown some efforts to tackle child poverty through much needed social welfare changes but failed to deliver the ambition and vision required to meet its own target of lifting 100,000 children out of consistent poverty by 2020.

"However, whether these measures and others will fully address the thousands of children who are homeless; or waiting months and even years to receive vital healthcare; or adequately support families living with disadvantage remains to be seen," she added.