Finance Minister Paschal Donohoe has said the point at which an income earner pays the higher rate of income tax will rise next year by €750 a year.

Announcing the change, Mr Donohoe said that a system where those earning an average wage are charged the higher rate of tax is unfair.

The Minister also said he would introduce targeted changes to the Universal Social Charge that reduce the rates but that does not not narrow the USC's tax base. 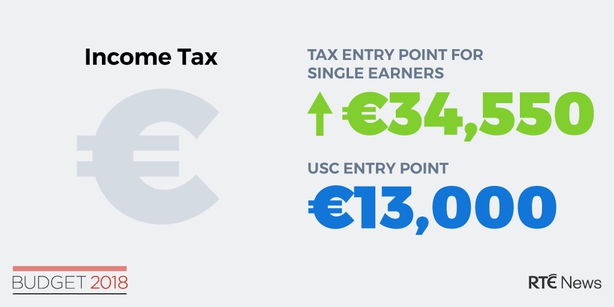 Mr Donohoe said he would set up a working group to plan the process of amalgating USC and PRSI over the medium term.

"A key objective of this group is that this process does not narrow the tax base but ensures that our personal taxation system is both competitive and resilient in the future," he added.

An increase in the tax credit for self-employed people was also announced in today's Budget.

The Minister said he would increase the Earned Income Credit for the self-employed by €200 to bring it to €1,150 a year from 2018.

The Minister also announced a new Key Employee Engagement Programme (KEEP) to support small and medium sized businesses in their efforts to attract and retain key employees in a competitive international labour market, by providing for an advantageous tax treatment on share options.

He said that KEEP will allow SMEs to provide key employees with a financial incentive linked to the success of the company.

On corporation tax, the Minister said that the 12.5% tax rate is, and will remain, a core part of the country's offering.

"With so much change ahead, Ireland must compete, not only on the rate, but on the ability to offer certainty," the Minister said.

In an effort to smooth out corporate tax receipts for the Exchequer, the Finance Minister also said he was cutting the tax-write off offered in relation to the transfer of intellectual property to 80%.

This change in respect of expenditure by a company on intangible assets will be made from midnight tonight, the Minister added.

The Small Firms Association has welcomed Budget 2018 as a step in the right direction for small business.

SFA Director Sven Spollen-Behrens said he especially welcomed the announcement of the Key Employee Engagement Programme (KEEP), the retention of the 9% VAT rate for the tourism sector and the introduction of a Brexit loan scheme for small businesses.

The SFA director noted that only 6% of employees in Ireland are shareholders in the company where they work, compared to the EU average of 22%.

"Our members are keen to see the detail of the scheme and to start using it to help their businesses to grow and reward their key employees," he added.

Sven Spollen-Behrens also welcomed the Earned Income Tax Credit for the self-employed which brings it closer to parity with the PAYE Tax Credit.

"The SFA has fought for many years to end the discrimination that has too long been a feature of the income tax system. We will continue to campaign for the gap between the EITC and the PAYE Tax Credit (€1650) to close fully in next year's Budget," he added.