The Chairman of the Fiscal Advisory Council has clarified comments he made earlier today stating that Budget 2016 was too expansionary.

In an interview on RTÉ's Morning Ireland Professor John McHale said the council was surprised by the increase in supplementary spending in this year's Budget, which was announced in a White Paper at the weekend.

He also questioned the policy of increasing spending in an economy that is already growing very strongly.

However, in a statement this afternoon, Prof McHale revised his position, saying that "while Ireland is below its Medium-Term Objective (MTO) of a structural budget balance, the rules require an annual improvement in the structural balance that is dependent on the state of the economy".

He added: "While Budget 2016 projects that these conditions will apply in 2016, the actual required improvement of 0.6% of GDP was set earlier in the year based on the projections in place at that time".

Prof McHale said the information that the required improvement was fixed earlier in the year has not been published and was not made available to the council.

He said he "regrets any confusion caused by reference to the possible requirement to improve the structural balance by greater than 1% of GDP in 2016 in an interview on Morning Ireland".

The statement also said the council has confirmed with the European Commission that the required improvement is the same as was stated in the Budget.

A detailed analysis of Budget 2016 will be undertaken in IFAC’s Fiscal Assessment Report, to be published next month.

The Department of Finance welcomed the clarification by Prof McHale on the required improvement in Ireland’s structural balance for next year.

Normally the Fiscal Council issues a post-Budget analysis several weeks after the Budget speech is made.

But today Professor McHale made an unprecedented intervention, speaking on RTÉ's Morning Ireland to express surprise at the size of the Government's spending package.

The council had endorsed the parameters of Budget 2016, which included an increase of €1.5bn in the size of the Budget.

But it had not expected a similar amount of spending going into this year's Budget by way of supplementary spending, effectively boosting the size of next year's budget expansion.

Prof McHale also questioned whether the Budget would meet the terms of fiscal rules that require tighter budgets when the economy is growing strongly. 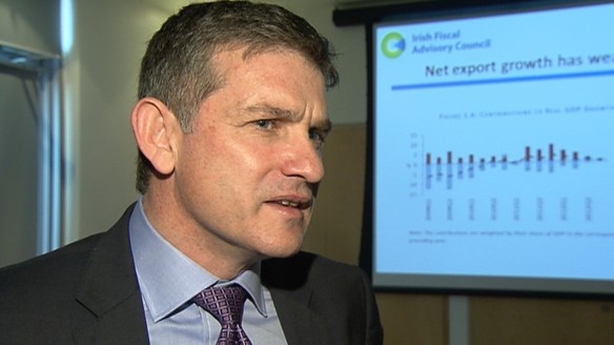 "The spending this year looks like it's going to be €1.7bn higher than was budgeted and about €1.4bn of that is current spending. We did anticipate that there would be overruns in health, but we didn't see that other spending coming," he said.

Minister for Finance Michael Noonan this morning rejected suggestions that the Budget is too expansionary.

Mr Noonan told RTÉ's Today With Sean O'Rourke that the Government had ongoing dialogue with the European Commission in relation to the fiscal rules.

He said the Government was taking more out of the economy than it was putting back in.

Mr Noonan said in general he agrees with the general thrust of the Fiscal Council Advisory's advice but said it is all incorporated into Budget 2016.

Mr Noonan said he would be more cautious if he felt there was a danger of the economy overheating, but he said that was not the case, but he would watch it very carefully.

Meanwhile, Tánaiste Joan Burton has said Budget 2016 was crafted in a very careful and responsible way in line with EU obligations.

Speaking on Morning Ireland, Ms Burton said she accepts that the Fiscal Advisory Council will have to assess the proposals, but said the Budget was put together carefully.

She said predictions in terms of reductions achieved in the debt ratio to GDP, and the expectations for next year will put Ireland in the Eurozone average debt level.

Professor Kieran McQuinn of the Economic and Social Research Institute has said the Budget is essentially injecting a stimulus of somewhere in the region €2bn plus into the economy, or around 1% of GDP, as it currently stands.

He also told Morning Ireland that the key issue for the ESRI is that the economy is growing so strongly, that there is not a a case for injecting money into the economy.

Prof McQuinn said the ESRI does not believe the case is there, in terms of the actual spend which is now apparent.

He said the actions of the Government would not do any great damage to the economy, he said it was more the point of embedding sound practice at the heart of the budgetary process.

Also speaking on Morning Ireland, Mr Martin said there was no sense of urgency towards the homelessness crisis adding that the rent supplement mechanism could have been used to stem the flow of homelessness.

He added that there was a regional imbalance in terms of assisting growth around the country, with access to broadband in rural areas a major factor that impinges on business growth.

Mr Martin criticised the Government's approach to dealing with shortfalls in the health sector and said there needs to be more focus on how waiting times in hospitals are going to be cut.

Minister for Public Expenditure and Reform Brendan Howlin has said he is confident the Budget meets all of the fiscal rules that Ireland is subject to.

Speaking on RTÉ's Today with Sean O'Rourke, Mr Howlin said it is the job of the Fiscal Advisory Council to be ultra-prudent and that he would have been surprised if Prof McHale's comments were anything other than those of caution.

The minister said the Government checks its facts very carefully and it is fully confident that this Budget is in line with fiscal constraints.

"We are now in strict fiscal rules and we are very confident that we fully meet them. Both the expenditure benchmark and the progress towards meeting the medium term objective that we have set.

"The requirement under the rules is that progress be at least 0.6%, greater than 0.5% of GDP, as we announced yesterday it's actually 0.8% and before, and I understand even after the Budget, dialogue happened between the Department of Finance and the commission to underscore that, yes we were living within the rules as we have agreed them."

The minister said the Budget is not about taking taxes and spending them, but rather looking at measures to sustain a growing economy.

Elsewhere, the Irish National Organisation for the Unemployed said it was very disappointed that the Budget did not re-establish the entitlement of people under the age of 26 to a full Jobseeker's Allowance payment.

The organisation also criticised the failure to begin restoring social welfare payments for all people of working age to their 2009 levels when the maximum personal rate stood at €204.30.

However, the lobby group welcomed the Christmas Bonus boost to 75% of the main payment, the Fuel Allowance increase and the increase to Family Income Supplement.