Fianna Fáil Finance Spokesperson Michael McGrath has described Budget 2016 as an attempt by the Government "to take a short cut to popularity".

Mr McGrath added that the first three austerity budgets were regressive, last year's budget resulted in the bottom 10% of earners losing the most and the top 10% gaining the most.

He said zero reform was made on pensions. "Many of the best questions of our country have been completely ignored," he said.

Changes to the USC will only benefit a two-income couple, he said.

The budgetary process was not transparent, he said, and added that the issue of mortgage arrears is not being dealt with and that there are 38,000 accounts in arrears of two years or more.

Mr McGrath said the steps taken by the Government, combined with the steps of the Central Bank, has put the idea of home ownership out of reach for many people.

He called on the Taoiseach to ask the Central Bank to review rules in terms of mortgages. He said the issue of housing supply also needs to be addressed.

He said Budget 2016 was an attack on rural Ireland and that the Government was responsible for the steady erosion of services to rural Ireland.

The divide is getting bigger and bigger, he said, adding that Ireland is a divided country with a divided economy. He said the Budget does not include steps to tackle this divide.

He said that equality is the cornerstone of Sinn Féin's policy choices and said the reduction in the USC rate will not bring "our young men and women back to these shores". 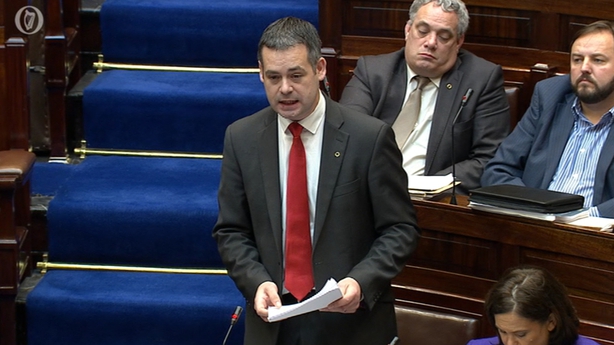 Mr Doherty said investment in education needs to be put at centre stage and said the damage the Government has done to the sector is far-reaching.

He said that the Government is not dealing with the social clause in NAMA's legislation, but getting NAMA to give money to developers.

Mr Doherty said inequality has been the hallmark of Government.

He also accused the Taoiseach of having "a neck" going into the Dáil with "a tear in his eye" following the death of another homeless man on Dublin's streets.

The Government has given €200m to the wealthiest in the State, while people were dying on the doorstep of the chamber, he said.

Independent TD Mick Wallace criticised the Government's announcement that NAMA is to provide 20,000 residential units before 2020.

He questioned having NAMA as a developer - pointing out that it was set up as a bad bank to hold assets until there was a recovery.

Independent TD Clare Daly said there was not a single measure to tap into the wealth of the top 300 individuals whose personal wealth increased by €13.5bn last year alone.

Independent TD Shane Ross said the Budget was worked out for the benefit of Fine Gael.

AAA and Socialist Party TD Paul Murphy said the Government had created a society where inequality is rife and labelled it progress.

Ruth Coppinger said the "crying need" in this country is the housing crisis. She said there are no rent controls in the Budget, despite the fact that rent is a key cost for people right now.

Stephen Donnelly of the Social Democrats said the Budget is politically clever but economically foolish.

He told the Dáil that inequality will continue, with less opportunities for future generations.

In a statement, People Before Profit Alliance TD Richard Boyd Barrett described the Budget as a bag of "pre-election tricks".

He said the very small additional funding for social housing and the health service were "totally inadequate and tokenistic and would guarantee that the crisis in housing and in our hospitals would be worse again in a year's time".