Ahead of the main event this afternoon, here’s a recap of some of the stand-out measures from the past five budgets; a period that saw the introduction of the Universal Social Charge.

There was no reduction in the State Pension in Budget 2011, but Child Benefit rates were cut by €10, while there were €8 cuts for Jobseeker payments, the Disability Allowance, and carers under 66.

A revised air travel tax of €3 was announced, to be introduced the following March.

It was announced that public service pay would not be cut, but a €250k cap was introduced for pay in the public sector.

Public sector pensions over €12k were cut by 4%.

The next president would have their salary capped at €250k, while the Taoiseach’s salary was cut by €14k and ministers saw a €10k pay cut. 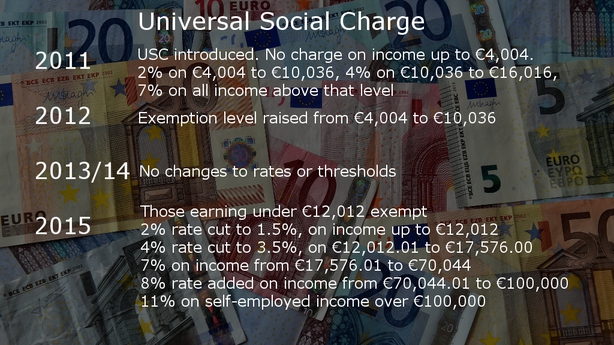 In Budget 2012, there were no changes to the main weekly social-welfare payments, but payments for new claimants of the Disability Allowance were cut to €100 a week for people aged 18-21, and to €144 for people aged 22-24.

A staff ceiling of 103,800 employees was introduced for the HSE, while there was a 2% cut in disability, mental health and children's services, saving €50m.

Higher education funding was cut by 2%, and the third-level student contribution was increased by €250

There was a €79m cut in spending for An Garda Síochána. 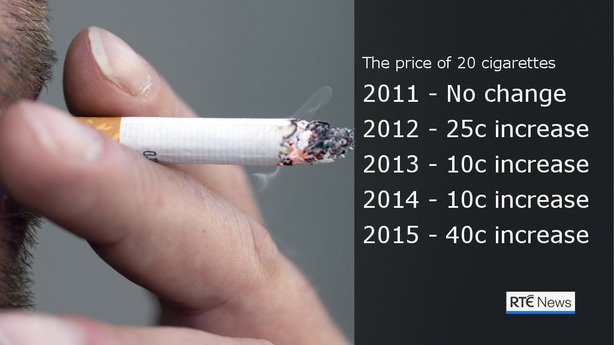 There was a 25c increase on a pack of 20 cigarettes, but there was no change in excise duty on alcohol.

The basic weekly rate of Social Welfare was untouched, but the duration of Jobseeker's Benefit was reduced by three months, from a year to nine months, and it was announced that Maternity Benefit would be taxed from 1 July.

Income Tax was untouched, but PRSI became payable on all sources of income, while the PRSI allowance for employees was abolished. 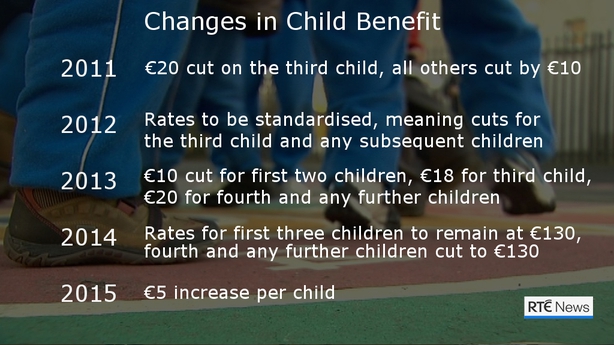 Child Benefit was cut by €10 a month for the first and second child, €18 for the third child and €20 for the fourth and subsequent children.

The prescription charge for Medical Card holders was trebled to €1.50.

Motor Tax and Vehicle Registration Tax rates rose from January 2013, with cars taxed on the basis of their CO2 emissions. Hikes ranged from €10 to €92 a year.

There was no increase in excise duty on petrol and diesel.

Duty on 20 cigarettes went up by 10c, as did pints of beer/cider and standard measures of spirits. 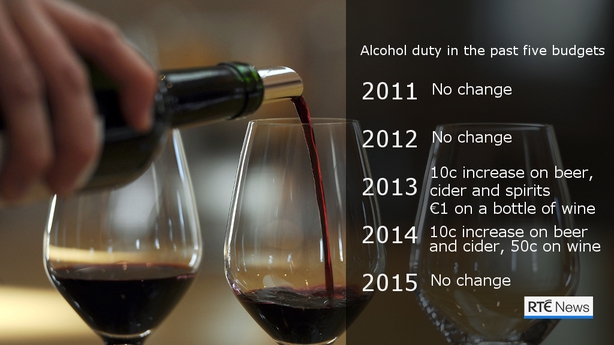 The closure of 100 garda stations was announced, along with a reduction in the opening hours of another seven.

Budget 2014 saw Child Benefit for the fourth and subsequent child cut to €130 from January, from the previous rate of €140.

The 0.6% pension levy was increased to 0.75% and extended until the end of the year.

RTÉ's income from free TV licences in the household benefits package was cut by €5m a year.

A review of all medical cards was announced, with the aim of saving €113m by removing ineligible and redundant cards.

Prescription charges for medical card holders were increased from €1.50 to €2.50 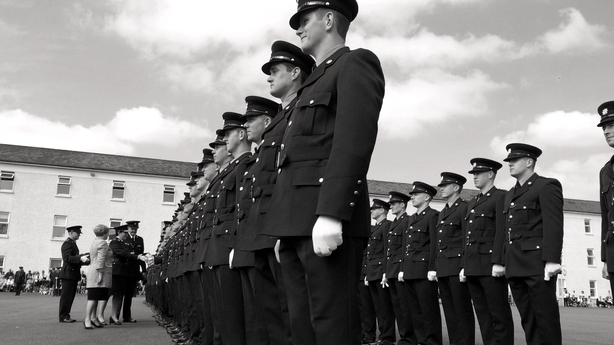 A new garda recruitment programme was announced, while over 1,250 classroom and resource teachers were also to be recruited.

There was no reduction in basic social welfare rates, but those aged 25 on Jobseeker’s Allowance would be on a rate of €144, while the €100 rate would apply to anyone aged 24 or under.

Plans for NAMA to invest €2bn in the Irish commercial market were announced.

The Government said it expected to exit the bailout programme by 1 January, and to bring the deficit to 4.8%, ahead of required targets.

There were no changes to duties on petrol, diesel, home heating oil or gas, or to VAT, income tax or the USC.

A zero rate of air travel tax from 1 April 2014, while the 9% VAT rate in the tourism sector was continued.

Budget 2014 also saw the announcement of free GP care for children under six.

Budget 2015 saw the news that Child Benefit would go up by €5 per child. 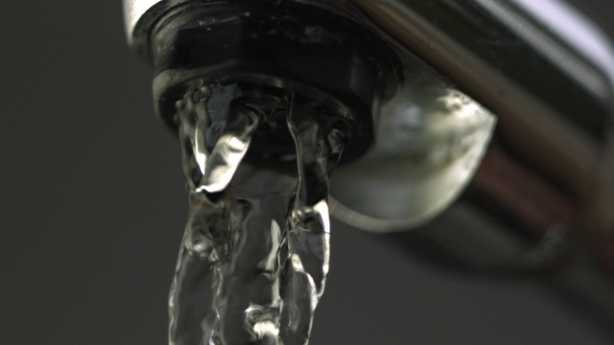 Water Charges Relief worth up to €100 was announced, while the entry point for USC was raised to above €12,000.

The Government announced that the 'Double Irish' tax rule was to be phased out, while the 0.15% pension would expire at the end of 2015.

The price of 20 cigarettes rose by 40c, but there were no changes in alcohol excise duties.

A €2.2bn capital investment in social housing over three years was announced, along with plans for Local Authorities to house extra 3,000 households in 2015

The Government said recruitment into the Civil Service would resume this year.

The 9% VAT in the hospitality sector was again retained.