Ireland must maintain a prudent fiscal policy in order to mitigate against the risk posed by Britain’s withdrawal from the European Union, according to the Minister for Finance.

In his Budget speech, Michael Noonan detailed a number of specific measures designed to help firms that might be affected by the uncertainty created by Brexit.

This includes an extension of the Special Assignee Relief Programme - which gives designated individuals income tax relief for work done in the State - until the end of 2020.

The Foreign Earnings Deduction - which gives relief for work “significant amounts” of work done in certain foreign countries - has also been changed to reduce the minimum number of days required to be spent abroad.

Mr Noonan said that the reduced VAT rate for the tourism and hospitality industry would be maintained in order to provide a "buffer" against the weakness in Sterling, while the Start Your Own Business scheme would be extended for a further two years.

Meanwhile, a number of measures will also be introduced for the agri-foods sector, including the ability for struggling farmers to "step out" of income averaging and pay only the tax due that year.

Mr Noonan said the Brexit vote prompted the Department of Finance to reduce its GDP forecast to 3.5% for 2017, but it was not possible to predict its exact impact on the Irish economy until a final settlement was agreed.

However, he said it was clear that Brexit represented a "real risk" to the economy given the close links and high level of trade between Ireland and the United Kingdom.

"Over €1.2 billion of goods and services are exchanged between us on a weekly basis," he said. "This trade supports 400,000 jobs, split evenly between the two islands, with many more jobs in the supply chain."

Mr Noonan said the best outcome for Ireland would be for Britain to stay closely linked to the EU, with no "hard border" being introduced with Northern Ireland.

The Government also hoped to maintain the Common Travel Area, as well as the preservation of a common labour market between the two countries. 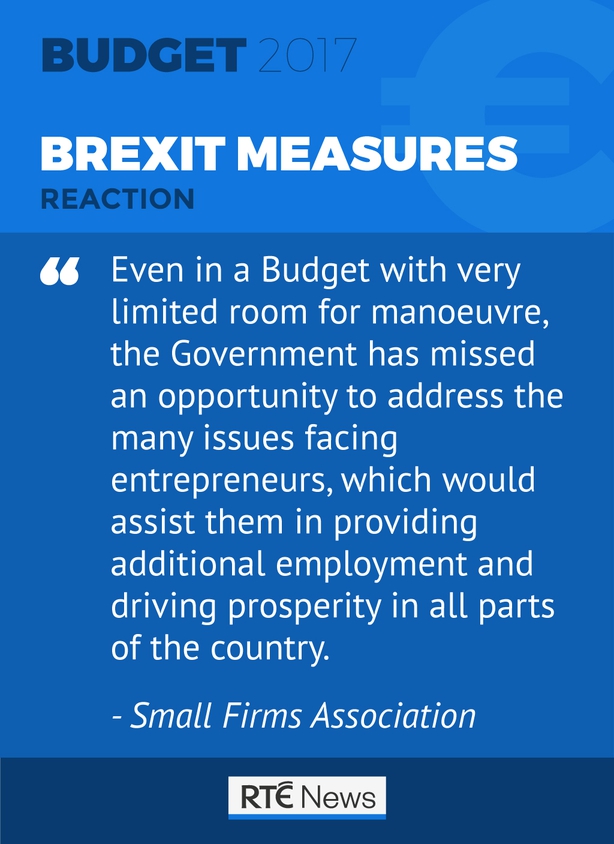 On Brexit, the Minister for Public Expenditure and Reform said that the Government woulsupport industry to both meet the challenges and to take advantage of any opportunities that may arise.

As he delivered Budget 2017, Paschal Donohoe said that spending in the Department of Agriculture, Food and the Marine would increase by about €119m.

Within this, the Government will continue to invest in Foodwise 2025 to boost the development of the country's agrifood sector and strengthen it in the face of what could be more difficult market conditions for exporters to the UK.

Additional resources have also been provided for Enterprise Ireland and IDA Ireland, mainly for more staff.

The Minister said this would provide further support to both state agencies to assist indigenous companies and attract overseas investment.

A Brexit team will also be established in the Department of Foreign Affairs and Trade, within existing budget and staffing arrangements. 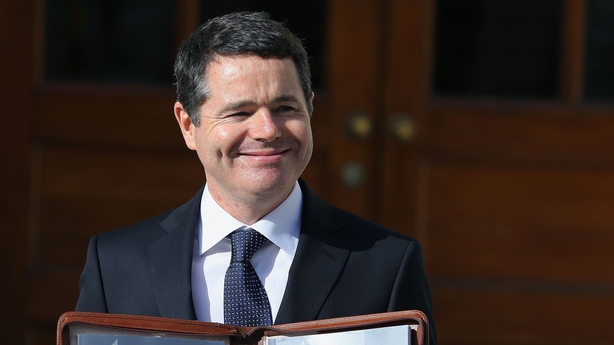 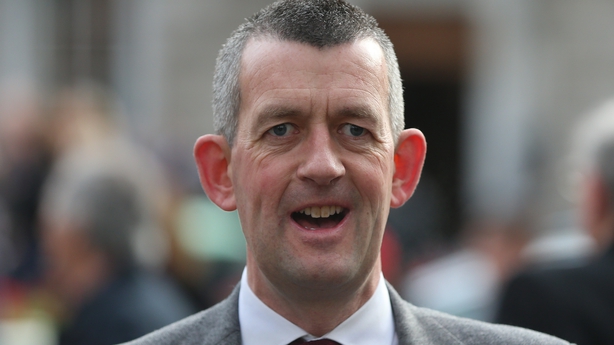 Sinn Féin's spokesperson for jobs, enterprise and innovation, Maurice Quinlivan, said he was shocked by the failure of the Government to allocate sufficient funds to agencies to offset the impact of Brexit.

"Agencies must be properly funded and given the resources they need to do their job," added Mr Quinlivan.

The Restaurants Association of Ireland gave a "cautious" welcome to the Budget measures, particularly the retention of the 9% VAT rate for the tourism and hospitality sector, which it said was vital for supporting businesses around the country.

Fáilte Ireland and the Food and Drink Industry Ireland also welcomed the retention of the 9% VAT rate.

Retail Excellence Ireland, meanwhile, set its sights on the 23% VAT rate, and said the failure to reduce this meant retailers were more exposed to the impact of Brexit and the weakness of Sterling.

"We are losing competitiveness and retail jobs will be lost," said REI's communications director Lynn Drumgoole.

"As sterling continues to weaken the growth of cross border shopping and online sales to UK companies means there is a real risk to the growth of the Irish economy."

Meanwhile, the Dublin Chamber of Commerce said that changes introduced in Budget 2017 to aid start-ups would do little to stop companies from moving from Ireland to Britain.

The body welcomed a change in Capital Gains Tax for entrepreneurs, but said the capping of the relief at €1m made it harder for the country to compete with global cities like London.

The Small Firms Association was also critical of the cap on CGT relief and said the Budget did not offer enough protection to small businesses post-Brexit.

The Irish Exporters Association welcomed the measures aimed at helping small firms and start-ups, but said more could have been done to assist indigenous companies trying to sell their products abroad.

"While the budget has provided some support for exporters, it does not place us at the forefront to compete internationally which is disappointing," said chief executive Simon McKeever.

"While external factors such as a weak euro and low oil prices are currently working in our favour, there are clear signs of a slowdown in some of our key markets.

"We need to put measures in place to be able to weather the storm, particularly in the current post-Brexit environment - we cannot rely on the UK."