The Taoiseach has said it would be a "very serious situation" if the UK enacted its bill to override parts of the Northern Ireland Protocol.

Speaking on the BBC's Sunday Morning programme, Micheál Martin said he accepted there were legitimate issues around the protocol but these could only be solved by negotiation.

"The unilateral decision of the British government to bring in legislation to undermine or to give the power to undermine almost all aspects of the protocol is not acceptable," Mr Martin said.

"It represents unilateralism of the worst kind in terms of honouring and adhering to international agreements that governments adhere to and sign up to and ratify in their parliaments.

"We accept fully there are legitimate issues around the operation of the protocol and we believe with serious, sustained negotiations between the European Union and United Kingdom government those issues could be resolved."

He said the legislation is "deeply concerning" industry and businesses in Northern Ireland.

"There are certain areas where we can improve the protocol and we should continue to do that."

Mr Martin has said the European Union is waiting for the UK to get "engaged in substantive negotiations".

"Ultimately, that's the only way this can be resolved, is through substantive negotiations between the European Union and the United Kingdom Government," Mr Martin added.

"In our view, issues can of course be dealt with and negotiated. But of course the legislation introduced last week and published last week is far wider than that.

"It's very, very worrying in terms of the actual damage it could do to key sectors of the Northern Ireland economy that has been doing quite well under the protocol.

"I feel that that story about the sectors that are currently doing well is not being articulated enough within the United Kingdom.

"I would urge people in the British government to talk in more detail with Northern Ireland business, with the Brexit Business Working Group to people in manufacturing, and different sectors of the economy."

Speaking later in Cork, Mr Martin said there's "no evidence" at the moment that enacting such legislation would help re-establish the Northern Ireland Executive, which has been delayed because of the DUP's opposition to the protocol.

"Also, we must bear in mind there's a significant viewpoint in Northern Ireland: 52 of the 90 [assembly] MPs wrote to the British Prime Minister articulating their deep concerns about what is being proposed."

Elsewhere, Michelle O'Neill warned that the British government's plan to enact legislation to scrap the protocol will have "colossal political and economic consequences".

Sinn Féin's Stormont leader said that Boris Johnson's plan to override parts of the protocol has "sounded alarm bells" across Europe and America. Speaking at the annual Wolfe Tone commemoration in Bodenstown, Co Kildare, the first minister designate told the crowd that it was an "irrefutable fact" that the protocol is working.

"Boris Johnson is incapable of accepting in a straightforward, honest and truthful way that this is the case," Ms O'Neill added.

"The attempts this week by Boris Johnson to sabotage the protocol in plain sight have sounded the alarm bells right across Ireland, Britain, Europe and America, awakening all those who value the Good Friday Agreement and who care deeply about safeguarding our peace and progress of the past quarter century.

"It is not taken lightly that this British government discards international law at a whim in such a reckless way, and only ever in their own selfish interests.

"Boris Johnson knows that to gamble the protocol is to jeopardise the British Government's agreement with the EU on their withdrawal and future trading relationship with colossal political and economic impact.

"The Tories have no mandate on this island.

"However, a majority of those MLAs recently elected do and there is a majority in the Assembly who support the protocol because it is working, giving us continued access to the European single market, creating jobs and economic benefit."

Ms O'Neill called for all Northern Ireland to re-enter the EU and said the Irish Government "must plan for constitutional change".

"We need re-entry back into the EU for all of Ireland," she added. 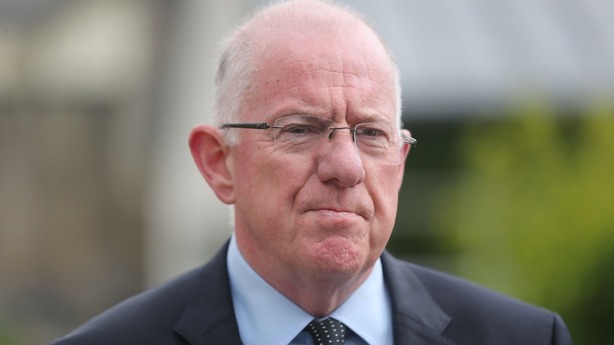 Meanwhile, the Chairperson of the Foreign Affairs Oireachtas Committee has said the trust between the Irish and British governments, carefully developed during the past 50 years, has been fractured by the Conservative government.

Charlie Flanagan said the UK government is no longer seen by the EU as a good faith partner.

"We can only hope that other voices within the Conservative Party will take a more principled stand," Mr Flanagan said in a speech delivered at a commemoration in honour of former taoiseach John A. Costello

Mr Flanagan, a former foreign affairs minister, described any preparations for a border poll as premature, hasty, and divisive.

"Meetings and gatherings across the island preparing for a United Ireland without Unionism are without realism," he said.

Mr Flanagan said there is little evidence that the people of Northern Ireland would vote for a united Ireland.

"In fact, there is doubt if even the majority of people in the Republic would vote for a united Ireland, at this time. If the protocol remains in place Northern Ireland will continue to have the best of both worlds," he said.