Minister for Foreign Affairs Simon Coveney has said it should be clear by Friday if progress is possible in the European Union/UK talks on the Northern Ireland Protocol.

He was speaking after a lunch in Brussels with the EU's chief negotiator, Maroš Šefčovič, who is due to meet his British counterpart David Frost on Friday.

Officials from both sides will resume talks tomorrow on issues around medicines, customs formalities and agrifood checks on GB-NI goods, and an enhanced role for Stormont and Northern Ireland stakeholders.

Mr Coveney told reporters: "The EU team this week is up for making progress."

He added: "They want to be focused on solutions, and working in partnership with the British negotiating team ... so that by the time Lord Frost meets [European Commission] vice-president Šefčovič on Friday in Brussels, there can be the basis of real and measurable progress that hopefully both sides could take as a starting point to generate momentum to try to solve a whole series of other issues that need solutions over the next few weeks."

Mr Coveney played down the prospect of an "options" paper being circulated to member states by the Commission on the EU’s possible response to the UK triggering Article 16.

"You're likely to see probably an informal, verbal briefing of member states in terms of the approach that the EU would likely take. And I think that's positive thinking on the Commission’s behalf. What we don't want now is a focus on the consequences of triggering Article 16," the minister said.

Mr Coveney said the EU would provide "conclusive evidence" that, if managed properly, sanitary and phytosanitary (SPS) checks on retail goods moving from GB to Northern Ireland could be reduced by 80% and the customs burden reduced by up to 50% "or maybe more."

He said there was a "real opportunity" to find a solution on medicines, to ensure the free flow of medical products from GB to Northern Ireland, and that a solution could then pave the way for agreement on other issues.

Mr Coveney said that Mr Šefčovič wanted to avoid deadlines, but the minister said that if there was the will on both sides then the process could be concluded before Christmas.

Asked if he trusted the UK position, and the apparent change in tone from Mr Frost during his meeting with Mr Šefčovič in London last Friday, Mr Coveney said: "It's just hard to know whether this is a tactical sort of pullback for now, or whether it's a genuine effort to try to find a way forward. But our job is to be positive, to be optimistic, and to try to create windows of opportunity when they are there."

Mr Coveney said that if the UK did trigger Article 16 it would be seen as "a big deal" in member states and that the response would be "robust".

"But I have to say, everybody is now focusing on negotiation and trying to find solutions. But if that fails, and if Article 16 is triggered, and the British government decide to take that unilateral action, then I think there will be strong unity [among member states]."

Article 16 of the protocol allows either side to unilaterally suspend elements of the deal if it creates serious economic, societal or environmental problems.

The arrangement effectively keeps Northern Ireland inside the EU's single market for goods, resulting in some checks for products crossing the Irish Sea from Great Britain.

Talks should be 'given every chance to succeed'

Speaking in the Dáil, the Taoiseach said that the talks between the UK and the EU "should be given every chance to succeed".

Micheál Martin said that last week he emphasised this during a series of phone calls with the DUP, Sinn Féin and the UUP.

During the conversations, they discussed the risks around "any potential triggering of Article 16" would have for stability and prosperity in Northern Ireland.

He said that "there was good detailed engagement" during the conversations.

Mr Martin said he spoke briefly with First Minister Paul Givan at the Ireland-New Zealand rugby match on Saturday, and spoke with Deputy First Minister Michelle O'Neill at the start of the COP26 conference in Glasgow.

The Taoiseach said that "there has been a change of tone" in negotiations on the Northern Ireland Protocol.

"I think the UK government side has indicated that they want a resolution, both Lord Frost and the Prime Minister," he added.

Micheál Martin told the Dáil that all parties in Northern Ireland "favour access to the European Single Market" as it "has been beneficial to jobs and employment".

"I don't think they want the triggering of Article 16. They want a negotiated resolution," he said.

Speaking about the finalising of details in relation to accessing medicines, he said, "I think that can be done".

The Taoiseach said he has pressed for continued engagement with the North South Ministerial Council.

British Prime Minister Boris Johnson has insisted he wants to negotiate a solution to the post-Brexit issues affecting Northern Ireland, but said overriding parts of his deal with the EU would be "perfectly legitimate".

He said solving the problems with Brussels "still seems possible", but said the UK could trigger Article 16 "reasonably and appropriately".

During a speech to business leaders and diplomats at the Lord Mayor's Banquet in London, Mr Johnson said: "Let me say - given all the speculation - that we would rather find a negotiated solution to the problems created by the Northern Ireland Protocol - and that still seems possible. 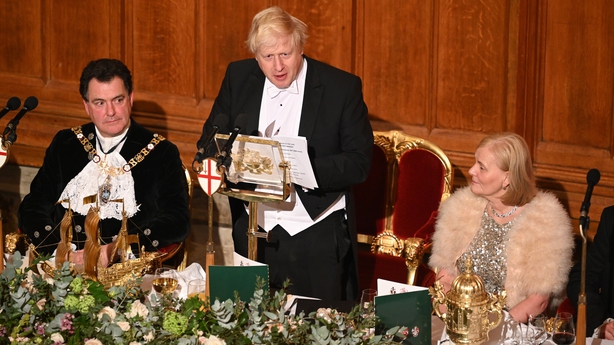 "But if we do invoke Article 16 - which by the way is a perfectly legitimate part of that protocol - we will do so reasonably and appropriately, because we believe it is the only way left to protect the territorial integrity of our country, and meet our obligations to the people of Northern Ireland under the Belfast (Good Friday) Agreement."

Talks have been under way for several weeks on a set of EU proposals designed to make the protocol more manageable for citizens, business and stakeholders in Northern Ireland.

The proposals cover the circulation of medicines, customs, agrifood checks and controls, and an enhanced oversight role for Northern Ireland institutions and businesses.