French trawlers withdrew from waters around Jersey today after a protest over post-Brexit fishing rights that led to a brief standoff between British and French navy and coastal patrol boats.

The latest blow to cross-Channel relations was caused by angry French fishermen protesting over new fish licensing arrangements on the Channel island of Jersey following Britain's departure from the European Union.

At dawn, a flotilla of around 50 trawlers massed in front of the Saint Helier harbour on Jersey, a picturesque self-governing territory that is dependent on Britain for its defence.

The people of Jersey witnessed an early-morning "sea of red lights and flares" as the demonstration by the aggrieved fishermen got under way.

Fears of a blockade prompted British Prime Minister Boris Johnson to send two royal navy gunboats to the area, with France following suit by sending two of its own coast patrol vessels.

"We won't be intimidated by these manoeuvres," French Europe Minister Clement Beaune told AFP of the navy deployment.

Jersey lies just off France's northern coast and its rich fishing waters were previously open to French boats before Brexit tore up the previous arrangements.

In the middle of the afternoon, after hours of bobbing around while letting off the occasional smoke flare, the French trawlers began withdrawing.

"The show of force is over, now it's politics that has to pick up the baton," said Dimitri Rogoff, president of the fishing association in the French Normandy region.

The British navy vessels HMS Severn and HMS Tamar were sent to Jersey's waters to "monitor the situation", the UK government said, while a French military source said the situation was "very calm overall".

Mr Johnson spoke to Jersey Chief Minister John Le Fondre yesterday, when the pair "stressed the urgent need for a de-escalation in tensions," according to a statement.

In the run up to today's protest, French fishermen had been loudly complaining about new licensing requirements announced by Jersey authorities.

They view the paperwork as deliberately obstructing them - the same charge made by other French boat owners who have denounced delays in the licensing process for access to British territorial waters. 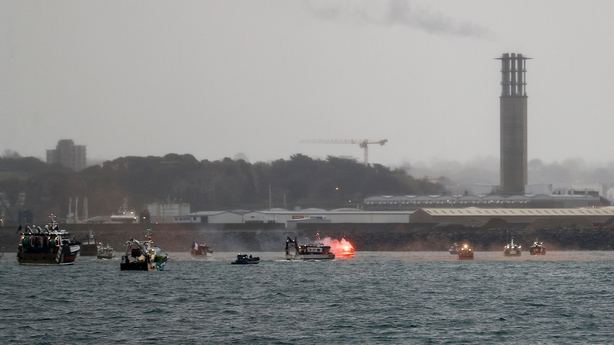 At the end of last month, more than 100 French fishermen briefly blocked trucks carrying British fish to processing plants in the port of Boulogne-sur-Mer.

French Maritime Minister Annick Girardin escalated tensions with Jersey on Tuesday by warning that France could cut off electricity supplies to the island, a threat condemned by the British government as "unacceptable".

Jersey's External Relations Minister, Ian Gorst, told the BBC: "We've always known that the transition from the previous arrangement that we had with France over fishing rights in Jersey waters to the new post-Brexit trade deal was going to be difficult."

He condemned the French threat to cut off electricity, as well as the protest, "but the answer to the issues that are being faced are without doubt talking and diplomacy".

During the demonstration, a Jersey fishing boat was reportedly rammed by a French vessel.

The BBC reported some of the French vessels were arriving back to Normandy by mid-afternoon today.

The scenes in Jersey stirred memories of the so-called "Cod Wars" of the 1960s and 1970s between Britain and Iceland which saw London deploy navy vessels to protect British trawlers.

In October 2018, dozens of French scallop fishermen confronted a handful of British rivals off the French coast, with a few vessels ramming into each other amid stone-throwing and smoke-bombs.