The UK is damaging itself to appease the EU, the DUP leader has said.

Arlene Foster wants the post-Brexit Northern Ireland Protocol to be replaced because of disruption to trade from Great Britain to the region.

She said some parcels were still not getting through and major retailers like John Lewis were not delivering despite an extension to light-touch regulation in some areas until October.

The Stormont First Minister said: "There is damage happening to the Belfast Agreement and its successor agreement.

"It has also damaged the UK internal market by putting in place a system to protect the EU single market.

"What we are doing is damaging our own country."

Prime Minister Boris Johnson was in "listening mode" as he visited Northern Ireland on Friday and met business leaders and the First Minister to hear their concerns about trade. 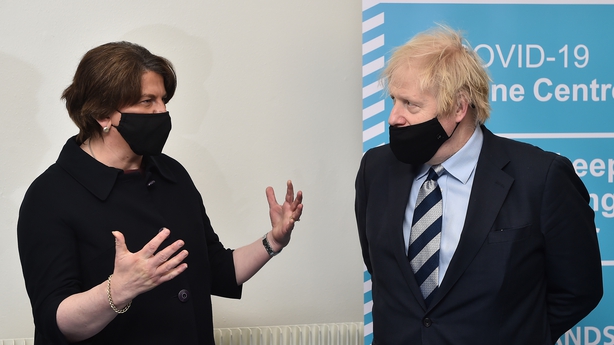 Stormont's Agriculture Minister has stalled work on permanent border checkpoints for food entering through Northern Ireland's ports from the rest of the UK.

Mrs Foster told Times Radio: "The Agriculture Minister (Edwin Poots) is looking at all of these issues.

"He is taking legal advice and speaking to officials as to what needs to be done."

She said food from Great Britain heading for Northern Ireland, like lasagne, would be marked for sale in sterling so posed no risk of entering the Republic of Ireland where they use euros.

She said the EU was imposing third-party checks, similar to if somewhere like China wanted to send goods into its single market.

The DUP leader added: "It is completely disproportionate to what is necessary."

The Northern Ireland Assembly will be able to vote on whether to scrap the protocol in 2024.

Mrs Foster said it needed to take action sooner because the economy was suffering.

She added: "We need replacement of the protocol and a much more sensible way to deal with the risk to the (EU) single market."

Mr Johnson has said the protocol was not operating in the way he envisaged.

The prime minister said he did not think arrangements he agreed with the EU would involve restrictions on the movements of food products such as sausages, on parcel deliveries and on soil from Great Britain entering Northern Ireland.

He said the protocol was operating in an imbalanced way and was causing irritation to the loyalist and unionist community in Northern Ireland as a consequence.

Mr Johnson said the protocol was necessitating more processes and checks than it should and that is why the UK government moved to delay its implementation until longer-term solutions are found with the EU.